Ides of March - More than a One-Hit Wonder 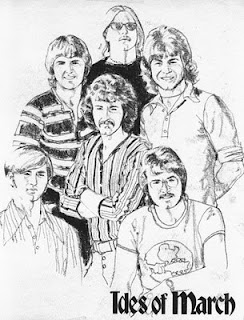 Ides of March
More than a One-Hit Wonder

Another Chicago band from this era that I wanted to feature was The Ides of March, best-known for their horn-infused 1970 hit, 'Vehicle'. But those from around the Chicago area, and most of the Midwest, know that IOM was much more than a one-hit wonder. Unfortunately, I could not find any unofficial recordings to include here. The Ides of March first began as a band in 1964, when 4 high school kids from Berwyn (Jim Peterik, Larry Millas, Bob Bergland, and Mike Borch) formed a group heavily influenced by the Mersey sound that they dubbed 'The Shon-dels'. In 1966, after Tommy James' group was putting out records under the name 'The Shondels', and inspired by reading Shakespeare's Julius Caesar, they changed their name to The Ides of March. While still in High School, the group released a series of singles (1966-67) that received airplay on Chicago radio stations (including 'You Wouldn't Listen', which reached #7 on the WLS pop chart). By the end of the '60's, and inspired by the brass sound of groups like Chicago and Blood, Sweat, and Tears, Jim asked a couple of trumpet-playing friends to help out the band on some songs. Having now acquired a recording contract with Warner Brothers, the band released the single 'Vehicle' with the new horn sound, which, of course became a smash hit. The Vehicle album also was a solid hit and featured several other songs that used the horns prominently. The success of Vehicle to some degree forced them to continue with the horn-influenced sound, even though that was not really representative of the bulk of the group's music. Somewhere along the way they added a keyboards player and trombone player, becoming an 8-piece band. For their 2nd album, Common Bond (1971), they continued a mix of 'brassy' songs with those with more of a folk-rock, CSN-style harmony vocals feel, including their second smash hit single (at least in Chicago), 'L.A. Goodbye', which stayed at #1 on the Chicago pop charts for five weeks in 1971. To me, this was a much better song (and more representative of the band's sound), and a bigger hit than Vehicle. Unfortunately, apparently the rest of the country didn't agree (or never heard it), because the single stalled at #78 on the national charts. The band released 2 more albums, World Woven (1972) and Midnight Oil (1973) on RCA, both of which continued more along the folk-rock style, with horns added for effect. Although these were solid albums, they failed to garner much national attenetion and did not produce any hits (although 'Colorado Morning' from Woven and 'Hot Water' from Oil, both fine songs, received local radio airplay). The Ides appeared on WTTW's (public broadcasting) 'Made in Chicago' in the summer of 1973, promoting Midnight Oil, and performed all the songs previously mentioned here. I had a tape of the FM broadcast, but it was lost or became unpalayble over the years (at any rate I no longer have it, so I don't have any live recordings to share). After 1973, the group disbanded, but it was not the end. Jim Peterik, the group's principal songwriter continued collaborations with others, writing hit songs for groups like .38 Special, Sammy Hagar, and others. In the '80's, Peterik also formed a new group, Survivor, which also had some big hits (although we won't hold that against him). Then in 1990, the band members were contacted about doing a reunion show at their hometown's Summerfest, of which all the member's attended. They then decided to get back together permananetly and have been going ever since, with extensive touring, releasing reissues, re-recordings and live versions of their old songs, as well as performing some new material and highlights from Peterik's other bands and songs (Here is their website: http://www.theidesofmarch.com/). And recently, in 2010, they released their first full-length studio album of all-new songs since 1973. Apparently they have also set a new record for being the longest-lived band (over 45 years) that still has all of the original members. They also recently received an exclusive honor from their hometown, Berwyn IL, as the road in front of their old high school was officially renamed 'Ides of March Way'. So, sorry I don't have any live recordings, but as a sample of their music, here is their single L.A. Goodbye from Common Bond.

Roller Coaster was the second hit the Ides had after You Wouldn't Listen. While it didn't get as high as Listen, it still made the Chicagoland charts.

I heard L.A. Goodbye on WLS back in the day and liked it much more as a single the Vehicle.