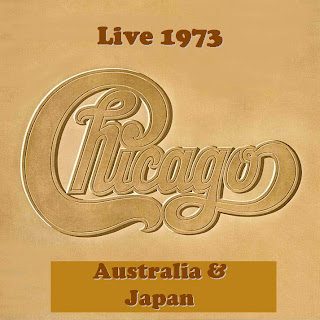 To wrap up this extended look at Chicago bands and artists from the early 1970's, here's a couple shows from the most famous Chicago band of them all, the group that took the name of their home city as their musical identity (although they were first known as the Chicago Transit Authority, or CTA, but shortened it to Chicago when the real CTA threatened legal action). Originally, I had not intended to include Chicago in this roundup, because even by the early '70's Chicago was already a big hit band, and not really a local act anymore (you'd have to go back to around 1967-1968, the CTA days, to catch them as a local band). But it seems ridiculous to leave them out of this review, as the early seventies were probably their best period. So, I have included 2 shows from 1973 here (which is the year I first saw them, at the old Chicago Stadium). The first is a high quality (but short) radio recording from Australia (date, city, venue unknown). The second is a more complete show from the '73 tour, a good quality audience recording from Sapporo Japan. Chicago VI was their current album at this time, and guitarist Terry Kath was in prime form. Included in both shows is probably Chicago's greatest composition, the epic 'Ballet for a Girl in Buchannon', as well as several songs from Chicago V and VI. the Japan show also includes a cover of the Beatle's 'Magical Mystery Tour'. This original lineup of Chicago was, of course, the best, and was together through most of the '70's, until Kath's tragic death in 1978. So, enjoy these gems from this classic period of Chicago.

Hey. Good to see you liked the Christmas post. You said you didn't have the time to compile your own. Well feel free to use mine as a starting point and just delete and add. Thanks for stopping by Arizona Jones. AZ Jones

at the end of chicago's "australian" show - while "Ballet For A Girl In Buchannon" is fading out - the radio announcer says in dutch: ".....concert from sep 7th, 1973 recorded in the Concertgebouw in Amsterdam.." Maybe only that track is from Amsterdam....???? ;o))

Thanks for these. I'm a big fan of Chicago's early years.