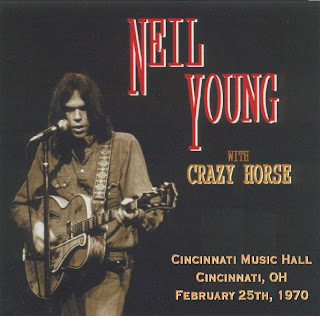 Here's another classic Neil Young concert bootleg from his early days, this one an excellent soundboard recording from the first show of his first full tour with Crazy Horse (following the release of their first album together, Everybody Knows This is Nowhere). This is one of the few high quality recordings available featuring the original Crazy Horse lineup (with Danny Whitten and Jack Nitzsche). It features many classics (and offered audiences the very first fiery live versions of 'Cinnamon Girl' and 'Down By The River'), as well as some rarely heard songs that were not played much after this. Once again, this is a classic early show that has been widely available for many years and certainly nothing new for dedicated fans, but is being offered again here now due to the demise of so many of the blogs, sites, and links where this was previously, but no longer, available (it seems most searches these days yields scores of only dead links). This is supposedly the best available source and version of these recordings, so if you don't have this one yet, you certainly owe it to yourself to pick this up and give it a listen.

Disc 1 (Acoustic Set)
1 On the Way Home
2 Broken Arrow
3 I Am a Child
4 Helpless
5 Dance, Dance, Dance
6 Sugar Mountain
7 Don't Let It Bring You Down
8 The Old Laughing Lady

Disc 2 (Electric Set)
1 The Loner
2 Everybody Knows This Is Nowhere
3 Winterlong
4 Come on Baby, Let's Go Downtown
5 Wonderin'
6 It Might Have Been
7 Down by the River
8 Cinnamon Girl

Don't know why I haven't had this one already, but I'm glad to have it now.

Jack N is such a curious and pivotal figure in West Coast pop, yet many forget what a jolt he gave to Graham Parker's career by producing Squeezing Out Sparks, still arguably his best LP. Good to know Jack was still pickking up a paycheck now and then as a hired gun...

Thanks for another great show.

I expect this will be of better quality than what I have.

Danny Whitten could have been one of the great ones. It's a shame.

Hi, The flac download on mega is Chrome Dreams, can you load the correct file please.

Fixed! Sorry about that.

Thanks BBKron, your a gent. Can't wait to see what your are going to pull out of the hat. Its like one of those TV programs Shall we call it Top 100 Bootlegs!!

hello BB..Thanks for putting this up here. I used to have it, but now its gone, but now its back, thanks to you. This is probably the best sounding bootleg of original Crazy Horse lineup.

Just shows a cloud with the word Mega in it when I choose the FLAC download ...

Brad,
You just have to try again another time. Sometimes Mega goes down for awhile and the downloads become temporarily unavailable. Just try again later, it should work. Don't know if this is due to heavy traffic at the site or what, but I have seen this from time to time. But I just checked, and currently the download link is working fine.

happy to find this show...thank you...