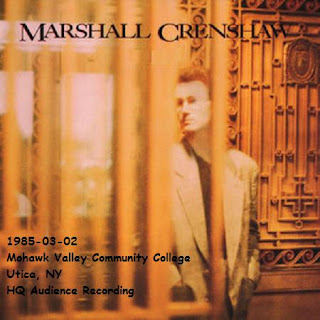 Continuing with the sensational power pop, rockabilly, retro-rocker, tune-smith Marshall Crenshaw, after disappointing sales for his second album, the wonderful Field Day (1983), Marshall took his time before releasing his third album, Downtown, in 1985. The songs on Downtown were a bit more introspective, and perhaps even a bit melancholy compared to the brightness of his debut, but nonetheless featured his great songwriting, and exhibited great melodic pop mastery. Fans consider it among his very best. However, sales were dismal, and no songs received even marginal radio play. Here is a show (audience recording, but not bad) from his 1985 tour. Here he only played 2 songs from the new album, featuring many more from the first 2 albums, as well as a number of masterful pop oldies (from The Hollies, Jackie Wilson, Buddy Holly, and Elvis). Have a listen.

wow, he's been doing 'Endless Sleep' for that long? Heard it a time or two at shows in the past 10 years.

thanks for all this - love the Marshall!

Thanks again for all the Marshall. Hard to believe that this guy didn't become a rich superstar, but that's the way it goes.

I'm sure you'd post them if you had any, but I'd love to get some Crenshaw concerts from the past ten years, just to see what he's playing and how he sounds.