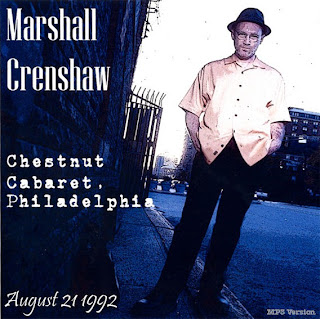 Here's more from the great, vastly under-appreciated Marshall Crenshaw, from a few years later. In the late 'eighties, Marshall released two more very fine albums (Mary Jean and 9 Others, 1987; Good Evening, 1989) to increasingly disappointing responses by the public. By the time of Good Evening, Marshall was being pressured by his record company, Warner Brothers, to be more 'commercial', resulting in some changes in the production and style, and the inclusion of more covers. Nonetheless the album was still very good due to his superior songwriting skills and cover interpretations. However, after lackluster sales of Good Evening, he was dropped by Warners.  But Marshall came back in 1991 with Life's Too Short, on the fledgeling label, Paradox Records (a short-lived MCA subsidiary). Now, freed somewhat from the pressures of a major label, he was just able to make the record he wanted to make, and not have to fit into any pre-conceived style or role. The result was one of his very best albums, with many memorable songs moving seamlessly from different styles and influences, mixing in more elements of jazz, blues, rockabilly, etc., as he matured as a songwriter and a seasoned music veteran, yet still all retaining the characteristic Crenshaw magic, and still quite rockin'. The strength of the new material is evident in this Philly show from 1992, where he features 5 songs from his latest album, as well as a great mix of songs from previous albums and his unique takes on a variety of pop classic covers (including songs from The Ramones, Dave Alvin, Gene Vincent, Richard Thompson, Dylan, and The Beatles). A great show, and evidence that Marshall Crenshaw was not just an early 'eighties flash in the pan, as he continued to make great music and albums throughout the 'eighties, nineties, and beyond.

These files were originally obtained from Big O Worldwide so thanks to him for making this available.
Posted by BBKron at 3:47 PM