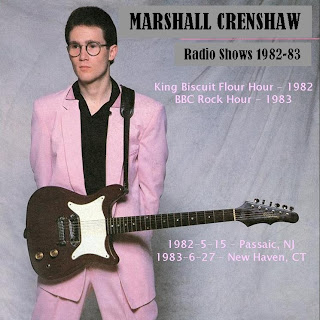 Marshall Crenshaw burst onto the music scene in 1982, with his bright, bouncy, throwback pop sound and the release of his fantastic, amazingly perfect, debut album, the eponymously-titled Marshall Crenshaw. 'Someday, Someway' was a top 40 hit, numerous songs received radio airplay, including 'Cynical Girl', 'Rockin Aroound in NYC', 'There She Goes Again', and 'Mary Anne' among others, and every track was an instant classic, just great from start to finish. Critics were beside themselves with superlatives, whereas the general public was a bit less enthusiastic ('Someday, Someway' was his only top 40 hit on an album that was loaded with potential hits). His follow-up album, Field Day (1983), was just as strong, but featured a bit heavier sound and production, and wasn't as well-received, but continued with great, catchy, pop melodies and brilliant songwriting (such as 'Whever You're On My Mind'). Playing on his retro style and love for old pop songs, Marshall played Buddy Holly in the 1987 film La Bamba, as well as recording some of Holly's songs. Marshall continued making quality albums through the eighties and beyond, but fewer and fewer folks seemed to be listening. After awhile, Marshall stopped trying to find a particular sound or style that audiences would like and just wrote and played what he wanted to, making the best music he could, regardless of what style, which has lead to excursions into jazz and country, and more serious songs, as well as pop. Although certainly having changed over the years, Crenshaw's music has always been of high quality, good stuff, worth checking out. In recent years, he has been hosting a weekly radio show where he shares some of his extensive and encyclopedic knowledge of pop music and pop history. He also has succesfully completed music projects through Kickstarter and subscription campaigns, with support of devoted fans. The two classic radio shows presented here catch Marshall at the height of his early days, following the release of his first two albums, respectively. They are both of excellent quality and really show just how great, fun and memorable Marshall's music is.

Great post. One of my all time favorites. Shame the record buying public didn't respond as well to his albums as the critics did.

I remember hearing his King Biscuit show, which I hasten to add, had the desired effect. (I went out and bought his debut.)

Thanks for giving this another airing.

Hey I for one really appreciate the Marshall Crenshaw and Jellyfish posts, these guys seem to be easy to overlook but both are solid acts that deserve a lot more notice! Keep up the great work here at BB Chronicles and realize your work is appreciated!

Zippyshare? It could be my least favorite hosting site. Is there still a Marshall Crenshaw file on that page or only so-called media players that are going to take over my computer?

Mediafire, Mega.nz, or even 1fichier are much better for the user, in my experience.