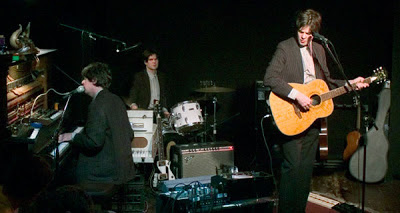 As previously mentioned, Jon Brion began performing every Friday night at Largo, a supper club in Los Angeles, in 1996, where his remarkably eclectic and entertaining shows, in which he presents a very unique mix of his own songs and unbelievably diverse covers played in mostly unusual ways, developed an enthusiastic following. His shows are entirely spontaneous and unscripted, meaning no setlist, with Jon himself not knowing what he will play at any show, and the musical direction often shaped by the audience. He has become known for being able to play virtually anything at a moment's notice with audiences determinedly trying to 'stump' him, but rarely succeeding. He might start out just with just some noodling on the guitar or piano, playing riffs or licks from 3 or 4 different songs before settling in and deciding just where to go and what to play, but once he locks into a song, he nails it, although he often throws some kind of curve into it. No two shows are even remotely similar, and you just never know quite what will happen. In addition to his own multi-instrumental versatility and original approach, the shows also became known for the semi-regular appearance of surprise guests that tended to show up, which started with Jon's friends like Aimee Mann, Fiona Apple, or Rufus Wainwright, but then grew to an increasing list of musical celebrities of whoever happened to be in town, that would drop by (one week might be Jackson Browne, next Michael Stipe, Neil Finn, Ian Hunter, or who knows).  Thus, very soon, his shows always sold out. Based on the strength of his live shows, he signed a recording contract with Lava/Atlantic in 1997 and began work on a solo album. However, when he finally finished recording his album, Meaningless (after completely recording the whole thing twice due to record company conflicts), the record company didn't think it was commercial enough and refused to release it. Eventually, Jon had to buy back the Master, and he released it himself in 2001 (on his own 'Straight to Cut-out' record label). Not surprisingly, the album was a little-heard pop gem, and it still remains as Jon's only solo album (but as mentioned previously Jon pays the bills by producing other artists and scoring films, which he has been quite successful at, so he's doing OK). Anyway, he continued doing his shows at Largo, and he still performs there to this day (although not every Friday anymore, but still regularly), which has been for an almost unbelievable 16 years now.  Another feature of his live shows that he has become known for over the years, is his live 'one man band' song construction, where through the use of live 'looping' technology he is able to 'build' a multi-layered, mutli-instrumental performance in which he plays all the parts. For example, he starts by laying down a drum beat for several measures, then 'loops' it, moves over to the bass, and adds a bass line, then moves to piano, adds the piano chords, then goes to guitar and adds a live guitar lead and vocals to create a stunning musical concoction. But again, more about that later. For the Largo show(s) I am presenting today, we go back to some earlier days, before most of the 'looping' type sets, but where we can hear his versatility at full bloom. Here is a show from 2000, where he starts off with a meandering jazz piano number, then features an unusually large string of his own songs from the Meaningless album, followed by a dizzying array of off the cuff covers (who else but Brion would feature a selection of Beatles songs that includes 'Being For the Benefit of Mr. Kite', 'You Know My Name', 'The Inner Light', and 'Tomorrow Never Knows'). Unfortunately, this recording cuts abruptly at the end of each song, so we can't hear what goes on between songs, and most likely there has been some editing of tracks (as this is shorter than most of his shows), but this is how I received these files. So, to fill this out, I have added some selections from another 2000 Largo show, which also features a few Brion (unreleased) originals and a strannge mix of cover renditions (ranging from the Themes from 'Gone with the Wind' and 'Mister Roger's Neighborhood' to pop classics from The Beatles & Elvis Presley all the way to The Go-Go's and Jimi Hendrix). It's not that great of a recording, but it is worth checking out to hear Brion's eclectic show and style.

You probably won't see this; but just in case . . .the file on ZS has expired and is no longer available. I just found your blog; if you can re-up this I'd be so happy. Thanks.

Yes, of course I see this. I have now updated the link, as well as the other Jon Brion links (2005 shows), so they will be available again. With Zippyshare, the links only last for 30 days past the last download, so for lesser-known artists like Brion the links can readily go down over time. Thanks for letting me know the links was dead, so I could make these shows available again. Hope you enjoy these.

Wonderful! I didn't figure you'd see my comment because it was on a relatively old post. But thank you so much!