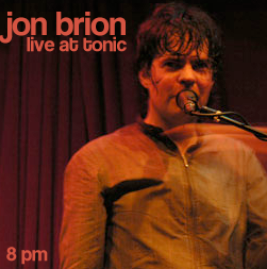 Here's more live Jon Brion, from a few year's later, in 2005, and by this time he has perfected his 'one man band' shtick of laying down multiple instrumental tracks using live 'looping' technology to build full band arrangements in which he plays all the instruments, creating a fantastic full sound from a single musician. Admittedly, this is far less impressive when listening on a recording than when seeing it done live. The problem with it as a recording is that it takes around 3-4 minutes just to 'build' the tracks before the song really even begins, which results in each song taking 8-10 minutes to complete, and while it is fascinating to watch as he constructs these tracks live, on a recording, it can be a bit tedious (at least until he gets it fully loaded and rockin', then it is quite impressive, as he really cuts loose). In this special show, for which I have presented both of his extended sets, he has traveled away from his home base club of Largo in L.A., to New York. He was in town for the TriBeca Film Festival that year, and performed these sets at Tonic, a club in NYC. And here we are treated to his typically eclectic mix of original songs and offbeat covers, spurred by audience requests. The late set is particularly intriguing, as he OPENS with a nearly 12 minute rendition of 'Stairway to Heaven' (which starts with a piano instrumental played in various styles from classical to honky-tonk, then he 'builds' a rockin' finish complete with blazing guitar solos, and that's just his opener!). After running through some of his own tracks, he goes to even stranger sets of covers, that includes everything from George Gershwin to the the Velvet Underground, with Prince melding into Eurythmics, then David Bowie, Brian Eno, and more. So, check this out. Afterwards, if you want to actually SEE Brion's multi-tracking wizardry in action, there are several videos available on youtube you can check out. Also available and worth checking out is some video of a pilot for "The Jon Brion Show" made for VH1 in 1999. VH-1 passed on the show, but Brion's filmmaking friend Paul Thomas Anderson liked the idea and made a few episodes of the show on his own, done in the way they wanted it to be made. One of these episodes has recently been made available by Anderson (who claims to have only recently found the tape) and posted to youtube. Of special interest is that the episode posted features Elliot Smith as the special guest, and there are numerous great moments of Brion and Smith performing together, so check that out, too.

Hi. Sorry to ask for another one, but would you please consider re-upping this one as well? Thanks for all your help. Love this blog site!

It's Fine, Mike. I try to keep these links active as much as possible, but sometimes some of these "lesser-known" artist links expire without me knowing about it. So, link now updated. Feel free to let me know about any others you are interested in that may no longer be available. I am especially interested in spreading the word and more of this great music from these "lesser-known" artists to more people, so your interest and enthusiasm is much appreciated. Thanks.

Any chance for a reup? I need these bad. Thanks in advance and sorry to ask!