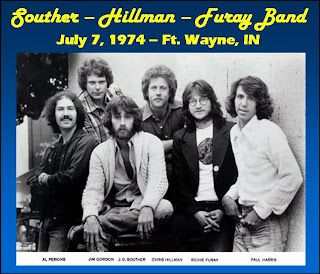 Speaking of great, all-but-forgotten, short-lived 'supergroups', I just found this show from the wonderful Souther-Hillman-Furay Band (thanks to Romeo Delight on the G101 Forum - Much Thanks!). I always really liked these guys and spent many hours listening to their 2 albums back in the mid-70's. I had looked for live shows by them previously, but never found any, until now, so this is a real rarity. For those that don't know or remember, SHF Band was a country-rock 'supergoup' that combined the talents of singer-songwriter J.D Souther (solo, the Eagles), Chris Hillman (The Byrds, Flying Burrito Brothers, Manassas), and Ritchie Furay (Buffalo Springfield, Poco), and were backed up by other former Manassas and FBB alums, Paul Harris and Al Perkins, and superstar drummer Jim Gordon. They formed in 1973 at the suggestion of David Geffen at Asylum records specifically for the purpose of creating a country-rock supergroup. They only made two albums (Souther Hillman Furay Band-1974, Trouble in Paradise-1975), and had just one hit single (Furay's 'Fallin' in Love'), before going their separate ways due to internal tension and personal differences within the group, and lackluster record sales, but I always thought they were a great combination of artists, made a bunch of excellent songs, and were one of the best bands of their kind in their day. Unfortunately, although they may have made a great combo musically and stylistically, personally there were problems from the beginning, and they never really bonded as a group (all of the songs were written by each individually, with no collaborations among them at all), and since they were not all that successful commercially, they disbanded by 1976. This recording is from their first and only tour in 1974 (a planned subsequent tour in 1975 was cancelled due to an extended illness of Furay), and catches the group while they still seem happy to be performing together. This Ft. Wayne show was was an opening set on a bill that also included The Eagles and Joe Walsh and Barnstorm (and tickets sold for about 4 bucks - those were the days). It's a fun and lively set, and it's a special treat and a real hoot to hear them play Souther's 'How Long' as a closer here. This same song (in an almost identical arrangement BTW) became the huge comeback hit for the Eagles almost 35 years later, in 2007 (although this was not a SHF song, few people seem to know that the song was originally on Souther's 1972 debut album). So, once again, please enjoy this unique glimpse of the legendary, but short-lived, SHF band.

Thanks for sharing this. You don't have it in a lossless version by chance do you?

Wow, I have been looking for something like this for years. I have worn out those two studio albums and some live material to digest. Only wish there was some video out there.