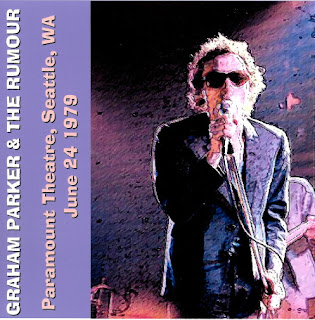 I'm going to start our 'New Year's Revolution' with some Graham Parker. It's really about time I posted some Graham Parker. Last year, I started the year by featuring Elvis Costello, so it's only right Graham gets to start out the year this time. Graham Parker emerged from the British Pub-rock scene in the mid-70's and was the real originator of the developing 'angry young rocker' new wave music style. He preceded Costello, Jackson, and the others by a couple years, yet never achieved the success that they did, despite much critical acclaim. His non-stop, high-energy, incendiary live performances with The Rumour are legendary, and his later, more refined, compelling, personal, and evocative songwriting continued to set high standards for all singer-songwriters. If you haven't already, check out his excellent 'New Year's Revolution' on my 2010 Christmas Collection. Hearing that again reminded me how good he has been his entire career, and lead to these posts. Also, a couple weeks ago, I had a strange musical dream where I was listening to this beautiful, wonderful song, and it turned out to be a duet with the current-day Graham Parker and Elvis Costello harmonizing with each other. In the dream, this was an incredible revelation and a truly beautiful musical moment. Now, as far as I know, Graham and Elvis have never performed together, but it would be pretty cool, right? Now, I don't know why I dreamt that, or what the song was, but it definitely made me want to hear some more Graham Parker. So, I 'll post a couple of Parker's shows. This first one, a fine radio broadcast from 1979, the height of The Rumour days (and in support of arguably their best album, Squeezing Out Sparks), features many of their most well-known songs and their trademark unrelenting pace for the whole show. So, here's to Graham Parker, another of the all-time great, but sadly under-appreciated rock artists.

Effin' A, BB! Great to have some GP from the Great NW!

thanks, this looks great.

Mr. Parker & the Rumour and their 'Shooting Out Sparks'-era glories seem practically forgotten these days.

Thanks for helping us remember!

Hi!
Just wanted to thank you so very much for the 1979 Graham Parker concert; it is positively superb: Graham and the boys performing most of what I consider the finest album released during the New-Wave era, Squeezing Out Sparks, along with other delicious tidbits. A remarkable performance!!