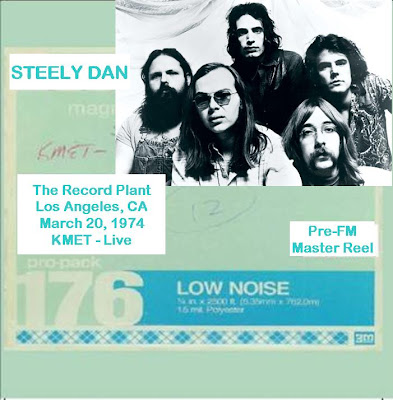 Finally, I am posting something from another of my very favorite bands, the truly unique, different, and compelling, Steely Dan. The only reason I haven't posted them sooner was simply that much of their stuff is already available on other sites. But listening to Skunk Baxter and The Best's version of 'Bodhisattva' last month, reminded me again of just how great these guys were, particularly in the early years, and as a live band. Now, any Steely Dan is great, but the first three allbums, in particular, were, for me, by far their best stuff. Before Fagen & Becker and their assemblage of various studio musicians settled into their midtempo, cool, jazz-funk groove (exemplified by Aja and Gaucho) in the later years of the band, in those early years they were still more of a rock band, a real, live, rock band (unconventional, yes, but still rockin'). With the dual guitars of Skunk Baxter & Denny Dias, there was more rockin and jammin' than in later years, and they put on some great live shows. Unfortunately, they only had one full tour as a headlining act (1974), after which Fagen & Becker told the band that they would not tour anymore (they were never comfortable performing live), and that they would continue solely in the studio with a variety of studio musicians. Thus, this was essentially the end of the 'band' phase of Steely Dan, as guitarists Skunk Baxter & Denny Dias, and drummer Jim Hodder left (Baxter went to the Doobie Brothers, Dias & Hodder still played on some Dan tracks, but were not 'members' anymore). Thus, there are only a handful of live recordings from this phase of the band. Fortunately, there are a few very good quality ones among these. Although Steely Dan continued making albums through 1980 (and achieved their greatest success with Aja and Gaucho),  we would not here any live Steely Dan again until 1993, when Fagen & Becker got back together (along with a large Jazz Band) for a big world tour. They have been touring on and off (and released new albums in 2000 and 2003) ever since. Thus, most of the live Steely Dan shows around have been from these reunion tours. But, great as these more recent reunion shows are, make no mistake, the band was still best back in their early days, and the 1974 tour, which featured songs from their two best albums, Countdown to Ecstacy and the as-yet unreleased Pretzel Logic, presented Steely Dan as a full-fledged jazz-rock band for the only time ever.  This show, an excellent Pre-FM recording from a radio show early in the tour, is fantastic, and marred only by the fact that it is not their full-length set (obviously shortened for a 1-hr radio broadcast, as was the usual practice). Probably the best sounding recording available from the '74 tour.

Note that a remastered version of this same show is also now available here.

Stay tuned for more great Steely Dan. Since this was not their full-length show, next I'll post another excellent recording from this tour that features additional songs not included here.
Posted by BBKron at 1:42 PM

Great show - thanks so much.

The intro is Disc Jockey Richard Kimble. Performance was broadcast via remote from The Record Plant in L.A., California. Great stuff, THANX!

All I want to know is, who was the guy who introduced them and "Boddhisattva" live in Santa Monica. Cause "Santa Monica... has def'unnutlee been set on fai-yah."

Far out- i've been listening to a lot of their studio work lately- can't wait to hear them live from '74.
many thanks,
d

Hi. Probably the best '70's Dan boot. Has anybody any info on where I can find Walter Beckers "11 Tracks of Whack" demos album? TVM...Paul

This is really a nice blog in which you discuss some major info about music and how to concentrate on it.
https://www.creativestudiosla.com/