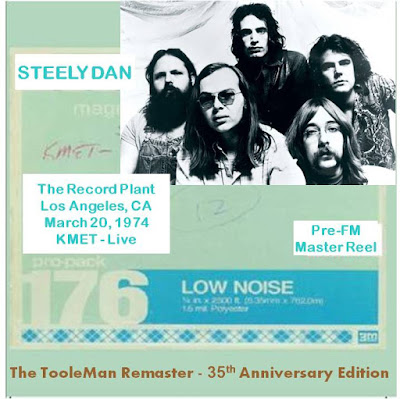 Ok, I'll wrap up this mini-tribute to Steely Dan with another classic show from that great 1974 tour while still a rock band (last before going all studio thereafter, that is, until the reunion and 'Big Band Dan' tours starting in 1993). So, here is a very well-known show, and one that I have previously featured before, as it is a great Pre-FM recording of a radio show (KMET-Live), with great sound. But here, this time, is a newer, remastered version of that classic show, by The TooleMan, for a 35th Anniversary Edition (made in 2009) of the show. Although the original recording was already very good, TooleMan has tweaked it here and there to improve the sound a bit more. The only drawback to this show, however, is that because it was made for a radio show (and to fit a one hour timeslot), it is a shortened version of their show (This show is missing 'My Old School', 'Dirty Work', and 'Show Biz Kids' from their regular setlist for this tour, which is alot to miss). But aside from that, this is a great show, with great sound, and definitely - a classic.  BTW, for those that prefer the unaltered (Pre-FM recording, not remastered), it is still available on the previous post (here), and I have added the FLAC version of that show, too).

Remaster notes - As with many tapes of this vintage, I thought a little more bass was needed. While I was at it, I ironed out a couple of tape wrinkles, too. Also, tiny amount of pitch correction, re-tracking, etc. - TheTooleMan, March, 2009

Thanks a lot for this rare recording!


I never dreamed outtakes like this existed for the masses. Thanks TooleMan and BB!