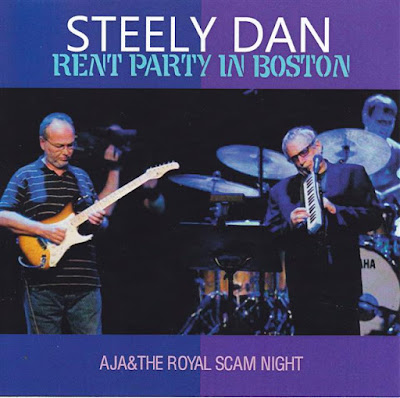 
Been listening to Steely Dan all week, since news of Walter Becker's passing, especially my two favorite albums of theirs, Countdown to Ecstasy and Pretzel Logic, just superb, and their entire catalog is exceptional. What a tremendous loss. And although I think many falsely assume that because Donald Fagen is the de facto front man and more outspoken member, that Becker played a lesser role in the groups music and sound, but that is not at all true. Becker was an integral part of everything about the band, from the songwriting (music and lyrics) to the musical sound, style, arrangements, and production. Anyway, in looking back on what Steely Dan shows I have already posted on the blog, it was clear that there are many more that could be included to give a more thorough depiction of the band and their various tours (in addition, will update those that don't include lossless versions). So, first up here, is a great show and excellent recording from the Dan's 2009 Rent Party '09 Tour. This tour was notable for featuring shows on multiple consecutive days in major cities, where they would feature a different full album each night. The albums featured included Aja, The Royal Scam, and Gaucho (unfortunately, no dates included Countdown to Ecstasy or Pretzel Logic, or even Katy Lied). In cities where they played 3 or 4 nights, they also included an "Internet Request Night" where the band would play songs requested by ticket-holding concertgoers through a special log-in internet vote for that show (although this request night seemed especially intriguing, as it turned out, and probably not surprisingly, the songs most requested by the audience were mostly the same popular songs they already were playing most nights anyway, but still resulted in several songs that had not been played live in many years, greats like 'Any Major Dude' and 'parker's Band, etc., and overall, between the request night and the full album shows, this tour resulted in the greatest variety of songs being played than on any other Steely Dan tour). Anyway, this Boston show was quite special itself, for several reasons. In Boston, they were scheduled for 3 nights, with the plan being an Aja night, a Gaucho night, and an internet request night. But on this first night of the Boston shows, the band treated the audience to a combined Aja and Royal Scam Night, doing both full albums (in addition to several other songs). This was the only night of the tour where they did two complete albums. In addition, there were a couple of  other Boston-only surprises, in that they also performed a couple of songs with special meaning for the Boston audience, their own 'The Boston Rag' (which hadn't been featured in any live shows in decades), and The Standells 'Dirty Water', a local Boston standard. Again, this was the only show where these additional songs were performed, just for Boston (and only time ever for 'Dirty Water'). So, this was a special night, and this great recording captures it all. The recording I had of this also included a bonus track of  'Pretzel Logic' with guest Steve Winwood from a 2011 date, so that is included as well. Enjoy!

Never had the chance to see Steely Dan live, so these are welcome. Thank you.

thanks so much for using Mega as well, just can't stand all the other ones. I had a great time at the Beacon a few years back when I was in NYC on business and noticed Steely Dan had a full week run, it was the last night of the run "greatest hits". I scored third row dead center on the Beacon website about four hours before show time. What a treat!!

I saw them during this same tour in Akron, Ohio at EJ Thomas Hall on November 17th, 2009. I had really good seats and the show was an absolute blast. Finding this download was completely by chance, but I'm so glad you posted this. What's even better is that they did BOTH sets, meaning that I get to hear the Aja album live, which unfortunately I wasn't able to make the night before. I think that one was sold out. Thank you!


All of these Steely Dan live uploads have been special audio treats. Thanks for sharing this concert!