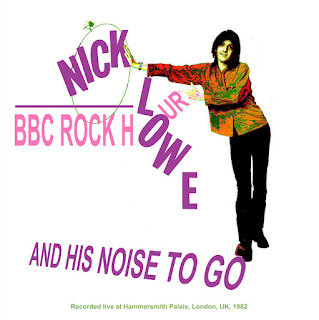 After the breakup of Rockpile (1981), for Nick Lowe's next band, he continued to work with guitarist Billy Bremner, and added guitarist Martin Belmont, drummer Bobby irwin, and keyboardist and vocalist extraordnaire Paul Carrack (formerly of Ace, Roxy Music, and fresh off his brief but successful stint with Squeeze). As with Rockpile, Lowe was perfectly comfortable sharing the the lead vocal duties with Carrack. This new band incarnation was dubbed 'Noise To Go'. However, with the addition of Carrack's keyboards and crooning vocal style, the music had a somewhat different sound, with more keyboards and ballads added to the pop and rockers. They still could rock out when needed, but overall, they had a bit less aggressive, softer sound. This band was predominantly used on Nick's next 2 solo albums, Nick The Knife (1982) and The Abominable Showman (1983). This band, much like with Rockpile, also served to back up Paul Carrack on his solo album of the time, Suburban Voodoo (1982). The same core band (but with Billy Bremner dropping out to join The Pretenders), and renamed 'Nick Lowe and His Cowboy Outfit', continued on for a couple more Lowe albums (Nick Lowe and His Cowboy Outfit, 1984, and The Rose of England, 1985) and tours. Presented here is a BBC Rock Hour show, taped March 15, 1982 during the 'Nick The Knife' Tour and broadcast on June 27th. This is an excellent representation of Nick's music at that time and a fine addition to any music collection. I also have a good FM broadcast of a later Cowboy Outfit show (1985) for those interested (coming up next).

Hi...I've tried 6 different times to download this file and it stalls at about 20%...is anyone else having a problem with this file?

Just downloaded the file without any problems.

I'm having the same problem as Gerald. Any chance of a repost? Thanks!

Gerald and Tom,
I downloaded it again and had no problems. Even did it twice to be sure. So, the problem must be on your end. Try downloading at off-peak hours, or different times of the day. The file has been downloaded successfully by hundreds of others already, so there is nothing wrong with the upload. Just keep trying - It's worth it.

This particular file is just not cooperating....It is the only file that has ever given me problems...I can download anything else that is here or any other Mega download...except this one...Of my many tries the best I got was 95% before it stalled out..Oh well..It's not to be.

thanx for these rarities & rave ups...really looking forward to hearing Carrack & Lowe togther...but alas i also got stunted at around 18% ... givin' it another go soon...

totally awesome live set from Nick and the boyz!
Thanks so much for all your work!