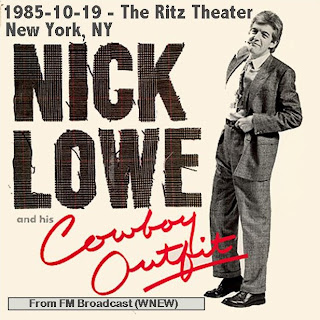 OK, so, here's the next stage in Nick Lowe's evolving recording and touring bands, Nick Lowe and His Cowboy Outfit, as recorded in an FM broadcast during their Rose of England Tour. Although essentially the same lineup as his previous 'Noise to Go' band (w/Paul Carrack, Martin Belmont, and Bobby Irwin), The Cowboy Outfit incarnation was characterized by a bit more of a roots rock sound, as exemplified by songs such as 'Seven Nights of Rock', 'Darling Angel Eyes', 'Half a Boy and Half a Man', and a reworked version of 'I Knew the Bride'. However, after two critically successful albums and tours, this would be the last for this form of the band. This fine 1985 show, although not nearly as good a recording (taken from on-air broadcast) as the previous Lowe shows I offered, presents a nice mixture of old and new Lowe songs. Shortly after this 1985 tour, Paul Carrack went on to join Mike Rutherford in Mike and the Mechanics. Interesting side note: a couple years earlier, Nick produced and he and this band backed up John Hiatt on side 2 of his 1983 album, Riding With the King, where they became good friends. Nick's Cowboy Outfit included a previously unreleased John Hiatt song, 'She Don't Love Nobody' on the Rose of England album (also included in this show). After the Cowboy Outfit wrapped up, Nick went on to be in John Hiatt's backing band for his breakthrough album, Bring the Family (1987), along with Ry Cooder and Jim Keltner. Nick also toured quite a bit with Elvis Costello in 1987 and 1989, opening for Elvis as a solo acoustic act for many of his shows (see previous Elvis posts). Although the Cowboy Outfit was no more, Nick continued to work with all these guys on his next couple solo albums. In fact, his next albums (Pinker and Prouder Then Ever, 1988, and Party of One, 1990) would be a reunion of sorts, as they included contributions from all his old pals from Rockpile and His Cowboy Outfit, and were also produced by Dave Edmunds. Maybe next up should be some John Hiatt and/or Mike and the Mechanics, huh, to continue this 'stream of consciousness' style posting?

Thanks for the Rockpile/Nick Lowe
posts.More Lowe and/or Edmunds is always appreciated.

Sometimes I think this neglected period of Lowe's output was his best. This is where he really took the country turn he's been following ever since. Great personnel on this album as well. Thanks!