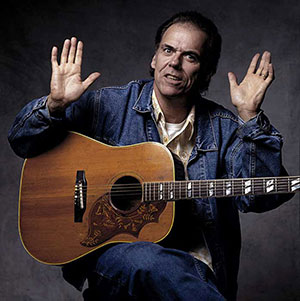 By the end of 1986, John Hiatt was ready to give up on his recording career. After a string of 7 unsuccessful albums and 3 record labels over the last 12 years, he was about at the end of his musical rope. Although he had achieved some acclaim and notoriety as a songwriter (his songs had been covered by Bob Dylan, Nick Lowe, Rick Nelson, and Rosanne Cash, among others), his own albums just didn't sell at all (none had ever even charted on the Billboard 200). After being dropped by his latest record label (Geffen) due to poor sales for Warming Up to the Ice Age (1985), he didn't have anywhere else to go. However, his friends and supporters all told him to stick with it, and those that had heard his latest songs were convinced they were his strongest yet. Then, England's Demon Records, who still admired his work, pledged to put up $30,000 to make a new album. John's musician friends also came to the rescue as he put together an all-star backing band consisting of guitarist Ry Cooder, bassist Nick Lowe, and ace session drummer Jim Keltner, all of whom had worked with John before, were friends and admirers, and came to help without receiving any payment for their services (Nick even shared a room with Hiatt at the local Holiday Inn during the recording session). The album was recorded in a quick 4 days in February 1987 with not a single song or track left behind (John had to quickly finish writing the last song on the last day of recording to have enough songs for a full album). Once the record was finished and the tapes shopped around, A&M Records picked up the album (& Hiatt) for distribution. Well, The album was titled Bring the Family and, of course, was Hiatt's breakthrough album and biggest success up to that time, and established him to the general public as not only a great songwriter, but a great performer, too. The album contained such soon-to-be-classic Hiatt songs as 'Memphis in the Meantime', 'Your Dad Did', 'Lipstick Sunset', 'Alone in the Dark', 'Thing Called Love', and his signature 'Have a Little Faith in Me'. 'Thing Called Love' became a big hit for Bonnie Raitt soon after, and 'Have a Little Faith in Me' has become Hiatt's most-covered song. Hiatt's next album, Slow Turning (1988) was an even bigger success, producing his first hit single and several more of his very best songs. This excellent show and fine recording comes from that period, after the release of Slow Turning, when Hiatt was enjoying big success for the first time, and features half of the songs from each of these two albums. This does not appear to be the complete show, however, as it does not include 'Slow Turning', which was his hit song at the time and usually sung as an encore (hard to imagine it was not included in the set). Another excellent show from around this same time (1988-12-16, and which includes a couple more songs and 'Slow Turning') was recently posted at T.U.B.E., so be sure to get that one too right here.

I've been looking for shows from this tour for ages!!!

Thanks for this lovely recording of a top notch show.