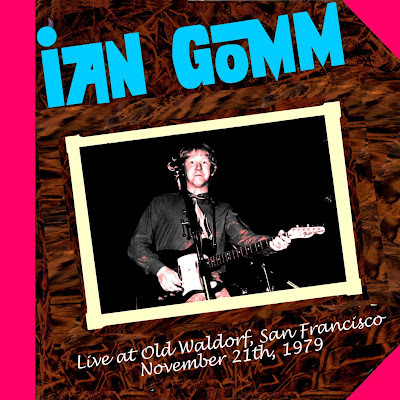 I've always really liked this guy. Ian Gomm burst onto the music scene in 1978 with his brilliant solo album, Summer Holiday (rearranged and released as Gomm with the Wind in the US), a fantastic pop album that should have established him as a major talent. When the single 'Hold On' became a hit in the US, a back-up band and tour (as opening act for Dire Straits on their 1979-80 US Communique Tour) was hastily established. I was fortunate enough to see him on this tour, and I was mightily impressed. I thought he had the making of a major star in the singer-songwriter tradition. Unfortunately, he was apparently quickly forgotten. His follow-up album, What A Blow (1979) was much less successful, yet still quite solid, but Ian slowly faded away after that. Although mostly known as 'One-Hit Wonder' in the US, these first 2 albums (and especially Summer Holiday) are filled with great songs and arrangements ('24 Hour Service', 'Come On', 'Dirty Lies', 'Sad Affair', and several others are great songs that all could have been hits. Even the covers, such as his cool-groove version of the Beatle's 'You Can't Do That' are done in interesting and unique ways). Ian got his start as rhythm guitarist with the legendary British 'pub rock' group, Brinsley Schwarz (which also included Nick Lowe). After Brinsley Schwarz broke up in 1975, Ian started his solo career with Summer Holiday in 1978. Here then is a show from that 1979 tour with Dire Straits (and which may well have been his only tour of the US). Although his voice is a little rougher in this show than on his records or as I remember it, it's still great stuff. Check it out.

Thanks to PVAc to 44.1 kHz (digivinyltal.blogspot.com) for making this show available
Posted by BBKron at 5:45 PM

Thanx!!! Ian, along with Nick and Dave and the rest - Love these guys!