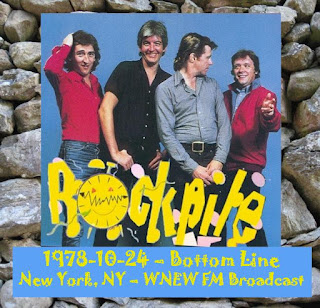 Listening to the Ian Gomm stuff again made me think about Nick Lowe, Dave Edmunds, and Rockpile during that same time period, and how great they were. After Brinsley Schwarz broke up (1975), Nick Lowe began working on a solo career, as well as being an in-house producer for Stiff records (remember, he produced the first several Elvis Costello albums). At that time he also started playin' and hangin' out with Dave Edmunds (who produced the last Brinsley Schwarz album) in what became the band Rockpile. Lowe played and toured with Rockpile, but since Edmunds and Lowe both had solo contracts with different record companies, they could not release albums under the Rockpile name. Lowe released his first solo album, one of the greatest pop albums of all time, Jesus of Cool, in early 1978 (nervous record executives re-ordered the tracks and changed the title to Pure Pop For Now People for the US release), which contained wickedly funny, biting, and tuneful critiques of the music industry, people, and modern life, and some of Lowe's greatest songs ('So It Goes', 'They Called It Rock', 'Heart of the City', 'I Love the Sound of Breaking Glass', etc.), of which 2 ('They Called It Rock' and 'Heart of the City') were actually Rockpile songs. The group only released one album under the 'Rockpile' name (1980's Seconds of Peasure), but actually made several albums together as a group, including two Edmunds 'solo' albums (Tracks on Wax 4 and Repeat When Necessary, 1978, 1979) and Lowe's Labour of Lust (1979), as well as being the back-up band for solo albums by Carlene Carter (Mrs. Nick Lowe at that time) and Mickey Jupp, and miscellaneous other tracks on Edmunds and Lowe's other solo albums. Rockpile was just a great rock band, known for their rockabilly and power pop influences, and actually produced a lot of fine music in just a few years. By 1980, Edmunds was wrapping up his recording contract, and they were finally able to release an album under the Rockpile name. However, by the end of 1980, friction between Edmunds and Lowe lead to the breakup of Rockpile, and they went their separate ways. Lowe continued to work with Bremner and Willams on subsequent albums, but did not play with Edmunds again for many years. Presented here is an excellent Rockpile show from 1978, a crisp, clean FM broadcast from the Bottom Line in NY. I also threw in a few bonus tracks of different songs from other shows (also FM broadcasts) from around that same time, including a couple from a very similar show at the University of Maryland (11-03-78),and a couple from a radio show from the Netherlands in early 1979. Great Stuff. Check it Out (and be sure to check out their other solo albums, if you can). I'll have some more Nick Lowe stuff next week.

THANKS FOR THE ROCKPILE DOWNLOAD.MUCH APPRECIATED

Thanks for this cool Rockpile live set.