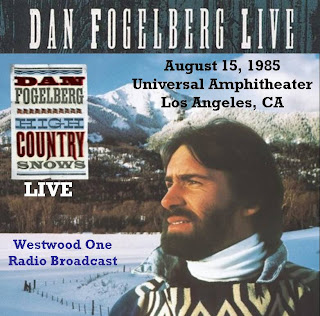 Listening to the early America shows again also got me thinking about this guy, Dan Fogelberg, and how much his music meant to me throughout the Seventies. Although perhaps best known for his moving, heartfelt love songs, he is actually quite a versatile and talented singer-songwriter-performer, with a wide range of musical styles encompassing aspects of country, folk, bluegrass, jazz, pop, and rock. Fogelberg, who was an Illinios boy just like me, comes from Peoria, IL, where I also went to school for awhile. He emerged in the mid-seventies as a musical force to be reckoned with, and was one of my early favorites. For me, his best album was the excellent double disc, The Innocent Age (1981). In 1985, he teamed up with an all-star band of country and bluegrass musicians to make High Country Snows, an album with a distinctly bluegrass style and feel. Unfortunately, like many other fine musicians, Dan left us too soon. In 2004, Dan discovered he had prostate cancer, battled it for quite awhile, but eventually died from it in December, 2007. Before he died, he worked on finishing up one last album of unreleased original songs, collected from throughout his career, called Love in Time, which was released after his death. And, of course, Dan left behind many other fine albums of his music, which has always been inspiring to me. Here's a fine show from Dan during that High Country Snows tour, which featured a bluegrass-style band and tunes. This was said to be among Dan's favorite tours. The first half of the show is Dan solo (on guitar and piano), then the band joins him for the second half. This is from a Westwood One Radio Broadcast that features very good sound quality, although as with most radio show versions, it does not include the complete concert. But it is one of few high quality live recordings available from this fine artist.

I heard earlier in the week the radio spot for this concert back in the late summer of 1985, and I waited anxiously during the days leading up to the broadcast. I was a huge Dan Fogelberg fan and didn't want to forget! Remember, these were the days void of cell phone calendars and email reminders. Plus, you got one shot at these broadcasts. So, I went out and purchased my brand new Maxell cassette tape and waited. It was a school night and my roommate was an early guy, therefore I had to set all this up earlier in the day, making sure I had the perfect signal from the local radio station, the tape cued not to cutoff the beginning of the show (some will know exactly what I'm referring to) and all the crazies warned not to bother me that night as I would not be available. Needless to say, I got a perfect recording of Dan in rare form that night. There has never been a better single performer live. Dan could do it all and with unique mastery, both vocally and instrumentally. Dan was a true musician and is truly missed by this fan.

If you want them?

Canadian Music,
Thanks for the back cover art for these 2 shows. nice job.

Any way you can repost this show? the link on media fire is dead. Also the links on the other site listed. Thanks

Thanks so very much. If you have any other Fogelberg boots, please post. He has been my absolute favorite since 1978. Still listen to him about 75% of the time.

No doubt a GREAT show, if it wasn't for the incessant clicking THROUGHOUT the ENTIRE thing !!! :-(