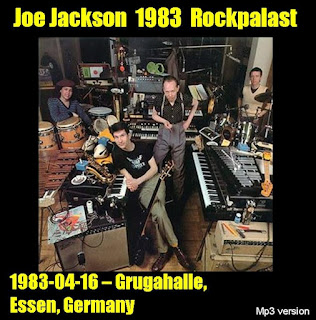 First up on our under-appreciated piano-rock hit parade is Joe Jackson, a consummate musician who has dabbled in various different musical periods and styles (pop, rock, new wave, jazz, swing, classical, etc), and has always produced quality stuff. He first came on the scene in 1979, and made a big splash with his post-punk new-wave style debut album Look Sharp!, when he was grouped with the likes of Elvis Costello and Graham Parker as the voices of change. His best period was undoubtedly the 1980’s, when he released one great album after another (including Jumpin’ Jive, Night and Day, Body and Soul, Big World, Live, and Blaze of Glory (Big World was my pick for top album of 1986 and high on the album of the decade list). Although his popularity has steadily waned since the early ‘80’s as he has ventured into more eclectic musical styles, he has remained a force to be reckoned with, and one of my favorite artists. Here is a fine show with very good sound quality from the Night and Day Tour in 1983, probably his most successful album and tour, from a German radio broadcast.

Thanks for this. I agree Big start, long fade. But with plenty of talent.

Thanks for this BB - sounds great! I have a nice set from the Big World tour on my blog if interested:
http://beaverbootsinc.blogspot.com/

Smithers,
Thanks for the link to your blog. I picked up the JJ and Neil Young sets. Looking forward to listening to them.

This is one of the most best concerst of Joe Jackson. I had it on VHS but the tape is broken. To bad. I wonder....is there a DVD?

To bad the adience is very loudy....sometimes. I hear Joe said....I have never seen so many drunken germans....
But still a great concert.

A DVD was just released, including not only this but also 2 other Rockpalast concerts by Joe.

Not sure what you mean, link still works fine. Probably had a problem with Zippyshare, as it can be troublesome, sometimes have to click the download button multiple times (and deal with annoying popups) before actual download will start.

Are you in the UK? Because apparently zippyshare has been completely blocked from access in the UK, but the reason for this is not yet known, or at least has not been made public. Sorry.

Yup. I'm in the UK. That would explain a lot. Thanks.