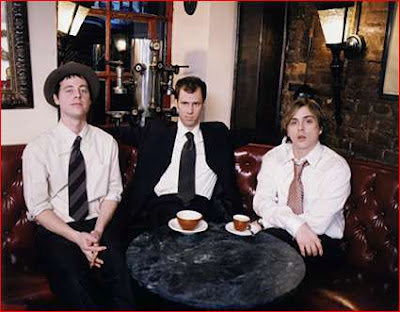 To wrap up my Featured Artist Tribute to Ben Folds, here are a couple of shows from his original Band, the Ben Folds Five, which was together from around 1995-2000. Now, many of his fans still think that he made his best music as part of this group, and they are superb, but you can be the judge. First up, is an excellent soundboard recording from 1999, although a somewhat short set (undoubtedly a partial show) from Stockholm, Sweden. Features a nice, but all too short, mix of songs from all three of their albums.


BF5 Reunion concert Video:
As fans of BF5 know, The group did recently (9-18-2008) get together for a much-anticipated one-time reunion concert in Chapel Hill, NC, which was webcast Live on My Space. Streaming video of the concert event, where they played their entire final album (The Unauthorized Biography of Reinhold Messner) from start to finish, is still available for viewing (free) at My Space here: http://www.myspace.com/fronttoback . A very Cool event for all Ben Folds fans. Check it Out.
Posted by BBKron at 3:12 PM

I love Ben Folds Five and their last show in Chapel Hill was amazing. Ben Fold's a capella album is pretty good too.

There is a new artist that sounds very much like Ben Folds Five. I think Lamar Holley may fill your Ben Folds needs :)

Thanks for posting this. I've been meaning to give Ben Folds Five a listen to, and this appears to be just the sampling I've been looking for.