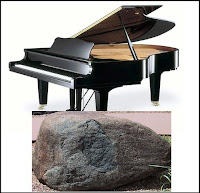 Judging by the distinct lack of response I got to my Ben Folds shows and posts, it seems that I was right on target in thinking that Folds is still largely unknown and vastly underappreciated by the masses. A shame, for that is some great music there, and I hope that more people will give it a listen. Nonetheless, moving on here at the Chronicles, and being inspired by Folds’ piano-based pop-rock, over the next couple weeks we will be featuring other largely underappreciated artists that deal primarily with, yes, piano-based rock music. I have always loved good piano and keyboard work, and some of my favorite bands feature keyboards prominently. Now, of course, when piano and pop-rock music are mentioned together, the big names that come to mind are Elton John and Billy Joel. Well, we won’t feature them here, there are plenty of their shows available elsewhere, and they are hardly underappreciated. No, we will be featuring some of my favorites that SHOULD be or have been as big as John and Joel, but, alas, were or are not. So, stay tuned for more piano-based rock!
Posted by BBKron at 3:00 PM

Love Ben Folds.
Saw shows in Philly and Vegas recently-excellent.
Also,my neice sang on his "University Acappella" CD.
It's also excellent and different.
Thanks for the shows