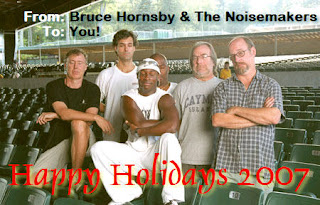 Next up in this mini-tribute to underappreciated piano rockers is another consummate musician and master craftsmen of the piano and keyboards, who can seemingly master all styles (pop, rock, country, bluegrass, jazz, classical,etc.), and that is Mr. Bruce Hornsby. Whether he's jamming with The Grateful Dead, Don Henley, or The Nitty Gritty Dirt Band, or leading his own band and performing his own deep song catalogue, he maintains a commanding presence at the keyboards, yet has a very low-key and humble attititude. Achieved tremendous initial success with his first song and album 'The Way It Is' in 1986, but in the subsequent years as he explored more varied and diversified music (and a lot of jazz-influenced records) his widespread popularity has steadily decreased. However, he has continued to make great, strong, albums and world-class music straight through, and is always a joy to listen to.
Here we have a real treat, an excellent unreleased live album from Bruce Hornsby & the Noisemakers from 2007. This was professionally recorded and produced (recorded, mixed, and mastered by Bruce's sound engineer - Wayne Pooley - using a soundboard matrix enhanced by select multi-tracks), and was offered for free download at Bruce's web site as a Holiday gift to fans around Christmas 2007. This recording was only offered as a free download, and has never been available for purchase through Bruce's livemusic web site, or any other commercial outlet. Thus, this album was never officially released or commercially available. Although no longer available through the website, I was one of those fortunate enough to be able to download it in 2007, so here it is for all to enjoy. Thanks Bruce!
'Happy Holidays 2007 - from Bruce Hornsby & The Noisemakers'
Disk 1
1. Country Doctor
2. Resting Place
3. Walk in the Sun
4. Talk of the Town
5. Jacob's Ladder / Cartoons and Candy
6. Gonna Be Some Changes Made

Disk 2
1. End of the Innocence
2. Fortunate Son / Comfortably Numb
3. Circus on the Moon
4. Sunflower Cat
5. The Way It Is
6. Rainbows Cadillac
7. Big Rumble
8. Standing on the Moon / Halcyon Days

Thanks a lot man, I lost my copy of this and have been looking for it for days. Rock on.