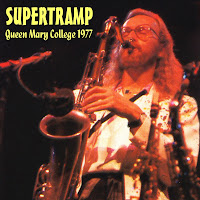 Continuing with great piano-based rock, Here is Supertramp, another one of my favorites, from their peak period (1974-1977). Because of their subsequent pop success (from Breakfast in America -1978 on) and coinciding musical irrelevancy, it's easy to forget that Supertramp was one of the great progressive bands of the '70's. Their 3 albums from these peak years (Crime of the Century-1975, Crisis? What Crisis?-1976, and Fool's Overture-1977) are just great, and among the very best from any artist. Although the Supertramp sound is most closely associated with vocalist Roger Hodgson, I have always preferred his counterpart, Rick Davies, in all aspects, the songwriting, vocals, and his distinctive piano (keyboard) playing. Davies songs and style, and the wonderful Sax (and clarinet) additions of John Anthony Helliwell, are what made these really special to me. So, here is a Great BBC Radio broadcast from Supertramp in 1977. There seem to be many bootleg versions of this show floating around, all apparently having slightly different songs included, and most having only a part of the complete show. This version combines all known BBC recordings (pre-FM), thus being the most complete version available (However, some other boots also mixed in songs from other dates). Although this is a great show, it does not have nearly enough songs from 'Crime' and 'Crisis', so I'll have some more Supertramp coming soon to better cover that period.

New Link! (Updated 01/14/14)
Supertramp-1977-11-10-PFM-London.rar
For those who prefer lossless, this show is also available from both the 'Quality bootz' and 'Lossless Bootlegs' sites
Posted by BBKron at 3:35 PM

Misspelled a word in my previous post. My apologies.

Anyway, I have waited a long time to be able to hear and enjoy this show. Many thanks; for all the trouble you went to on this, as well as all the marvelous shows you share. I'll be sticking around for a while.