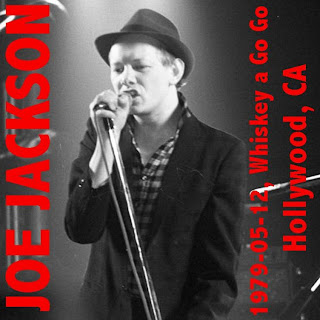 
In the wake of Graham Parker, many other 'new wave' and literate 'angry young rocker' type artists made their marks and presence known, most notably Elvis Costello, and a little later, in 1979, this guy, Joe Jackson. Previously I've featured some shows from around the middle years of his career (1983-Rockpalast, 1986-Tokyo), but not his early days. So, here is a rousing high-energy show with great sound quality from Joe's first American Tour in 1979, in support of his debut album, Look Sharp! He also previews a few songs from his 2nd album, I'm the Man ('Friday', 'Kinda Kute', 'I'm the Man'), which would be released later that year, as well as some interesting covers (The Maytal's 'Pressure Drop', Chuck Berry's 'Come On'). In this show it's easy to see how and why he made such a vivid impression on the late-70's music scene with his mixture of punk, rock, pop, and classic styles.

If I recall correctly, Joe played two shows that night, and either during the first or between shows, he hurt his leg and had to do the whole late show sitting on a stool. Interesting first impression, but he and the band were still great!