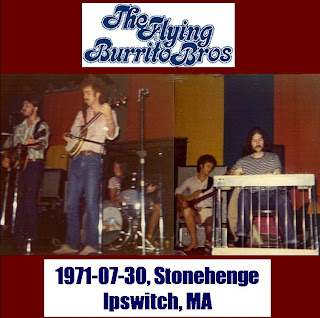 Here' s another previously uncirculated Flying Burrito Brothers show from David M from their 1971 tour, just 2 days before the Boston show previously posted (8/1/71-Boston Commons). Unfortunately, this is not a very good recording, as it suffers from from an annoying and persistent high-volume distortion throughout the show (in all but the quietest parts, such as the bluegrass section), that renders it quite difficult to listen to (David told me that he was right next to Chris's bass speakers, and the high volume was more than his recorder could handle. I was able to tone down the bass using EQ, but could not do anything about the overriding distortion present). This one is for dedicated fans and completists only. Because of the poor quality of the recording, I went back and forth on whether I should post this at all, especially since we already have the Boston show from this period. However, despite the problems with the recording, this is an excellent show, and almost half the songs in the set are different from those in the 8/1 show. So, I decided to go ahead and post it so that it will be available to all those that are interested in it. The pictures included on the cover art are actually from this show, and were also provided by David M. As indicated previously, these shows represented the last performances by this classic lineup for the band, as Bernie Leadon left just a couple weeks later (to join the Eagles), followed by Chris Hillman shortly after that (to join Stephen Stills in Manassas). So, despite the very real recording limitations, there are many interesting highlights here, and this is a worthwhile addition to the Flying Burrito Brothers legacy for dedicated fans.

Note: I have only uploaded this show as mp3 files. If there is enough interest, I could also post the lossless version, but given the recording quality it would only be worthwhile if there was sufficient demand for it. 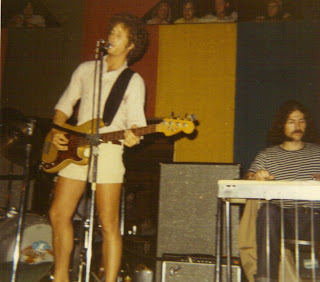 P.S. Bonus photo. I know this must have been a hot day in Massachusetts, but check out Chris's short shorts and bare feet (Ah yes - 1971). As long as you're comfortable Chris, it's alright with me.
Posted by BBKron at 2:13 PM

Thanks a lot to both David and BB Chron. Any "new" FBB is welcome, whatever the sound quality.

The title of track 12 is "Ain't That A Lot Of Love" (different spelling).

Thanks for correcting the title of track 12. Did you update the artwork as well (just so I know if I have to download it again)? Thanks.

Rocking--Byrd, Yes, I corrected it in the post, but I have not changed the artwork, filename, or tags. It just didn't seem worth it to have to delete, change, and re-upload the files for such a minor correction. Sorry for any inconvenience.

I agree totally with the other one, any new FBB is very welcome. Also the Hillman in shorts picture.