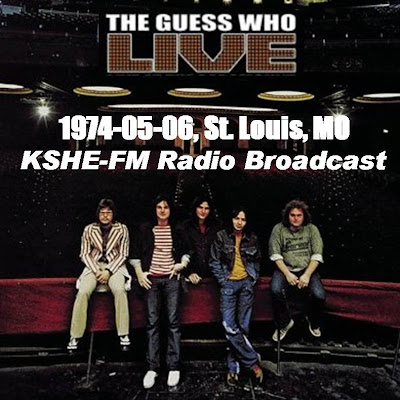 OK, before I move on to my next 'Featured Artist', I wanted to post a couple of great shows from former featured artists that I only recently acquired (and thus didn't have when I posted the other stuff). The first is from The Guess Who, and this is a real find. There are very few decent concert boots by these guys, so I was thrilled to find this FM radio broadcast from 1974, which still features the classic (and best ) group lineup. This is from the end of their Spring 1974 tour, and thus one of the last shows before guitarists Kurt Winter and Donnie McDougall left the group (or were kicked out, it's not clear). After they departed, jazz-pop guitarist Domenic Troiano was brought in, and the decline and end of The Guess Who was near. This show, however, still shows them near their peak form (This one comes at the time of Road Food and the single 'Clap For The Wolfman', which is a bit past their peak, I would have preferred a show from around 1972, around the time of Rockin', but this is still good.) This is a very good (clean) radio recording (lacking much low end, but otherwise great). Unfortunately, the show was marred somewhat early on by some equipment failures (blown amp or power outage or something) which causes delays, and forces Burton Cummings to ad lib and play a couple songs on piano only. Detracting from the recording also is the KSHE DJ, who feels compelled to interject something anytime there is a lull on stage (between songs, etc.). These are minor complaints, however, as this is still the best Guess Who bootleg I've heard, featuring a full show and many of their classics (including a rockin' 20-minute American Woman/Truckin/No Sugar Tonight Medley). Although not as good as their classic Live at the Paramount official live album, this is the best boot show I've found. Still a surprisingly underrated band.

Bonus Guess Who!
Here's another excellent, short but sweet Guess Who show, audio taken from the old 'In Concert' TV show from 1973 (FM radio simulcast-that's how they did these things back in the 'old days'). Same lineup as above. Good audio quality. Short 22 minute set for TV broadcast. You can add this to the above set, or just take as is. Enjoy!

Great find, BB. Normally, I'd be bummed with the sound's absent low end, but considering there are virtually NO prime time GW boots to be found, this is a total treat. Besides, with respect to Rockin', So Long, etc. etc., Road Food is my personal fave. Did no one record these guys during those glory years? Thanks again.

Thanks for the Guess Who live stuff and to Capt. W. for showing the way here.

Thanks! I have all the official releases, and always wanted to hear this version of the band live. The low end isn't really missing - I used some plugins to bring it back up into the mix. Maybe we could ask Iconoclassic to do a professional job with these tracks and release "Guess Who Live at the Ambassador"?

Thanks so much!!! Love this stuff! The GW

Thank You so much BB. I've had this sitting on my hard drive for a while now. I love it but couldn't find ANY info about it. Glad I finally found your site!!

Thanks for this! The only other live recording of TGW I've heard is their 2001 Runnin' back through canada album. Truly an amazing live band I think and I'm glad to have heard this set, the bass amp failure improvising shenanigans really make this something interesting and special to listen to really!