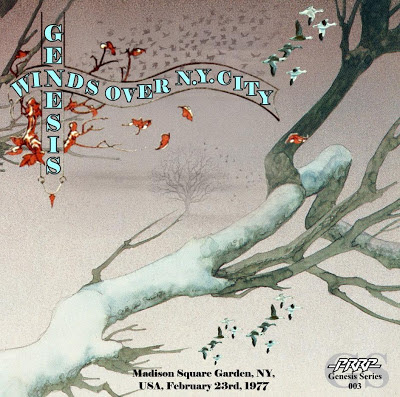 Following their highly successful 1976 tour, Genesis went right back to the studio (this time to a new studio in The Netherlands) to work on their next album. The result was another great, classic Genesis album, Wind and Wuthering, which was released in December 1976, making it their 2nd album of 1976. For the Wind and Wuthering Tour (Jan-Jun 1977), they recruited drummer Chester Thompson (of Frank Zappa and Weather Report fame) to fill-in and they put on their biggest and probably best show and tour to date. However, guitarist Steve Hackett was dismayed that much of the material he had written for the new album was rejected by the band and not included. Steve had already had success and acclaim for his own solo album (Voyage of the Acolyte, 1975), and was now feeling somewhat restricted within the group. So, following this tour, Steve left Genesis to concentrate on his solo career. The loss of Steve's songwriting influences and virtuoso, imaginative guitar-playing had profound effects on the group, as Genesis would never be the same again. Subsequent releases (as a trio) were more dominated by Phil Collins, and they moved from a progressive-rock band to a more radio-friendly, hit-producing pop-rock band. Thus, the 1977 tour was the last to feature the 'classic' Genesis lineup, and was one of their best-ever tours. A great official live album (Seconds Out) was compiled primarily from this tour. Continuing with presenting some of the lesser-available PRRP Genesis recordings, this show, from early in the US leg of the tour, although not one of the very best recordings from this tour (excellent recordings from London 1/3/77, Dallas 3/19/77, Sao Paulo 5/21/77, and Zurich 7/2/77 are all readily available), this is still nonetheless a great show, highly listenable, and a worthy addition to any collection of Genesis shows. PRRP has done a good remastering job in making the available recording for this show come alive.