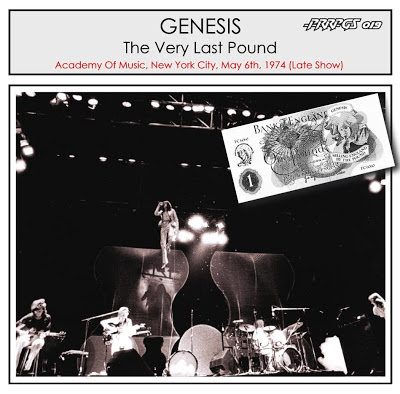 Here is the first Genesis show to be featured here from the excellent PRRP (Progressive Rock Remasters Project) Genesis Series (and ones that are generally not available from any other blog!), titled 'The Very Last Pound', as this was the very last show of the Selling England By The Pound Tour in 1974. This was the 3rd and last show at the Academy of Music in NY. The first show is featured in a very good and widely available boot (one version of which is another PRRP release, PRRPGS-013, which can be obtained at Qualitybootz and other places). This one, however, is the much lesser heard last show, which is also very good. It has the same setlist as the first show, with the exception of 'More Fool Me' replaced 'Horizions' from that set. This was one of my favorite Genesis tours, probably because Selling England and Foxtrot are my favorite Genesis albums, and this tour specifically featured those albums. One other note: this tour also featured the full version of 'Firth of Fifth', with the extended keyboard introduction (my favorite part), which was not included in the later versions of this song on subsequent tours (apparently Tony had some difficulty playing the part live, so they cut it out). Which makes these earlier versions all the more valuable. So, here's to a great Genesis show from 1974.

Note: Peter has problems with the lyrics to Firth of Fifth.

Please restore CD2. It was the last live where we could hear Peter Gabriel Supper's Ready sing, so I would love to have him.