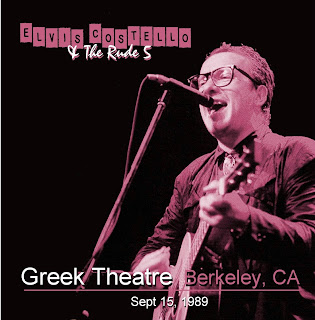 After Elvis's spring-summer 1989 solo tour (through US, UK, Europe, and Japan!), and with virtually no break, he went back to the US in August-September, and this time took with him a crack back-up band dubbed The Rude 5 (though on this tour there were actually 6), composed of various parts of previous groups he'd worked with, including Pete Thomas (of the Attractions), Jerry Scheff (of the Confederates), Larry Knechtel (formerly of Bread), Steven Soles, and multi-instrumentalist and oddball guitarist Marc Ribot and percussionist extraordnaire Michael Blair (from the Spike recording sessions). Ribot and Blair both had worked previously with Tom Waits, and were partially responsible for that funky, clanky, subterranean sound that Waits was becoming known for at that time, and that also shaped much of the Spike album. This was an eclectic ambitious group that brought with it all kinds of horns (tuba, trombone, cornet) and percussion (marimba, timpani, anvils), and funky new song arrangements. So, this was a really cool sound, especially following the mainly sparse solo shows. And the album Spike was a real mix of styles and moods, too, from the spooky Waits-like sounds of 'Let Him Dangle' to the the pop stylings of the McCartney-MacManus collaboration 'Veronica'. But somehow, it all worked, as did these cool 1989 shows with the Rude 5. Unfortunately, this recording from the end of the tour (next to last date), is not that great, and most of the band stuff is very muddy and way in the background (voclas are OK, but the instruments can't be heard clearly), so you can't really hear much of what is going on back there, which is a real shame, because it is definitely cool stuff. However, as this is the only available recording I know of from these 1989 Rude 5 shows, it will have to do, as it represents another unique look at the ever-changing world of Elvis's music and concerts. So, here it is, Elvis and the Rude 5.

OK, But before I get to the show, just wanted to also let you all know about a cool and relatively new blog, The Rare Stuff (http://therarestuff.blogspot.com/), which has featured some more nifty Elvis Costello stuff recently, including a compilation of The McCartney-MacManus Collaboration stuff, containing all the demos, songs, and some performances from that collaboration, which was from about this same time period (1988-89). Also offered there is a compilation of rarities and miscellaneous recordings not available on other albums, as well as some interviews and an expanded version of a Costello/Bacharch show (another of his succesful collaborations). In addition to the Elvis stuff, there's also some great and rare Graham Parker and other stuff. So, check it out, brought to you by new friend 'ThePopCulturist'.

Ok, So there it is, my look at Elvis in the Eighties. Hope you liked it, and found some new and interseting music in there. Of course, Elvis didn't stop there, and continued to grow and develop his music, style, and craft. But, the '80's were where the explorations started, with a wide variety of new music, sounds, styles, and shows. and actually, this late '80's period probably marked the beginning of Elvis's next phase, which was characterized by various collaborations (McCartney, Brodsky Quartet, Bacharach, Toussaint, etc), as Elvis continued to grow and develop through the 90's and beyond.
Posted by BBKron at 3:15 PM

Thans a million for all these great posts. This is a truly special blog, by all means.

Oops! It looks like the files have been taken down from the Elvis Costello Wiki Pages site. I don't know why. I will upload them and post them myself as soon as I can. So, check back for the new links.

An upgrade from the master recording is available on Dime. Torrent #292316.

Can't seem to get this file decompressed.
It wants a password but I'm not finding it.

I have a 1989 Elvis show (or part of one -4 songs) from Tower Theatre in Upper Darby, PA. I don't know who the backing band is. Could it be the Rude 5?
-Tim
timjhesq@gmail.com

Never got around to getting one of these files.
Any chance of re-upping them?
THanks