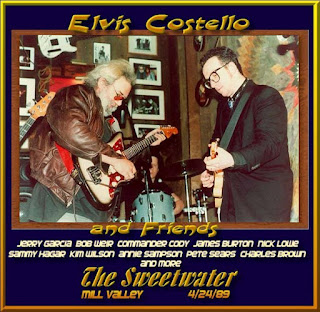 1988 marked the first year since 1977 that Elvis did not release a new album and/or tour extensively. Thus, no concerts available from 1988. His next album, Spike, was released in early 1989, and he started touring again in Spring 1989, continuing with predominantly solo shows, most often with Nick Lowe opening and joining Elvis for 2-3 songs. The shows were structured much like the 'Spinning Songbook' shows of 1987, with a solo set from Elvis, culminating with the duos with Lowe, then coming back out as his 'Napoleon Dynamite' alter-ego and doing an encore set of talk, requests, and various audience participation bits. The main difference obviously being the inclusion of several songs from Spike. The show presented here, however, was truly a one-of-a-kind event, in which, Elvis is joined onstage by none other than Jerry Garcia, Bob Weir, and other West Coast rockers for a wild and spontaneous jam session. During his Spring US tour, he was asked to perform for the Village Music (a legendary music store) 21st Birthday celebration at The Sweetwater in Mill Valley, CA. So, after his initial solo set (culminating with the Lowe duo on 'Peace, Love and Understanding'), he then did a few songs with his back-up band, a modified version of the Confederates). After that, however, other rock luminaries in attendance were called up to the stage. First Charles Brown and Kim Wilson sang a few songs, then Jerry Garcia joins Elvis onstage for some country tunes (with Elvis on vocals). Then Elvis asks if anyone else wants sing, and up comes Commander Cody and Sammy Hagar(?). Bob Weir eventually also joins the group for couple more, finally ending with Elvis back on vocals for 'Let The Good Times Roll' and 'Lovable'. Strange assemblage of artists, but alot of fun. It is not clear if Elvis stayed onstage and played throughout during the Brown and Wilson songs (probably not), but he was definitely jamming with Garcia and Weir, and Garcia does play through til the end of the set. Elvis and Jerry talked about the spontaneity of this show in a later interview with Musician magazine (March 1991 Issue), as excerpted here:
"Elvis: Certainly a candidate for the world's greatest record store is Village Music, in Mill Valley. Every year John Goddard has a party for his friends and customers, and he always has a really good bill of people. So last year on the twenty-first anniversary, I did a show with Nick Lowe, and he invited James Burton and Jerry Scheff, who'd played with me on the road. I did my little set, Nick did his set and then it was a free-for-all; Charles Brown did a piece, and people were getting summoned to the stage. I was standing in the corridor when I suddenly heard, "Jerry Garcia to the stage!" And, emboldened by several margaritas, I decided to join him.
Jerry: Not only that, but it was one of those situations where I had the choice of playing either Elvis' guitar, which is low and it's stiff, and the strings are quite wide as well, and all this confusing script, or of playing Burton's guitar, which is strung with spider webs. I mean it's the absolutely lightest you can string a guitar and still get a sound out of it. I'd take Burton's and play a note on it and it goes "spack." So I opted to play Elvis' guitar as the lesser of two evils. [*laughter*] And I vowed I would never go to another one of those shows without my own.
Elvis: It was a whole Three Stooges routine -- "Here, you take my guitar," "No, I'll take your guitar." I think I had Burton's old Telecaster for half a song, and James had my old Martin acoustic which wasn't cranked up so he couldn't solo--and Jerry's struggling with my guitar. But once everybody got settled we managed to struggle through a couple of Hank Williams songs. Like any sort of jam thing it inevitably came to degenerate towards lots of blues. But we managed a few songs with changes.
Jerry: A pretty high level of jam-sessionry really, considering what it was. Really fun. And Elvis' solo set was phenomenal, I thought. That's one of those things that I can't do at all, just playing the guitar and singing. You're so solid with that, you don't miss a band. I always feel like I'm missing a band."

So, hope you enjoy this odd and unique show. I'll wrap up this 'Elvis in the Eighties' series with one more show from 1989 later this week.

Ooh ahh! So glad you chose to highlight this performance. It sure is unique, and a whole lot of fun. Jerry may get some of 'em in the door, but Elvis'll keep 'em in their seats once they start listening!

In other words, if anyone's wondering if they should download this, DO!

PS BB, do you know any reason why I might be having trouble with those Manchester '87 files? I try to bulk-download 'em as zip files (I have a temporary MediaFire membership that allows me to do that) but when I try to unzip 'em they fail. Anyone else have similar problems? If I can't get it to work I guess I'll just download each track individually, though that's a bit of a PITA!

hai there, i'm missing one of two tracks when download as bulk zipfiles.

Hey PopC, I usually don't have much luck getting bulk downloads to work right. I generally just do it one at at time. Yeah, it's more of a pain, but if the music is worthwhile, I don't mind at all. I didn't have any trouble with the Man87 files. Glad you like the show. I'll put in a plug for your blog with the last '89 show, probably tomorrow. Thanks

Thanks a million for one more very special show. I wonder if you can help my get through to this also special blog Anything can Happen.

Sorry for my mistake but the blog I just mentioned is of course Anything Should Happen.

Sorry, but the Anything Should happen blog recently went private. Now only those with an invite can enter the site.