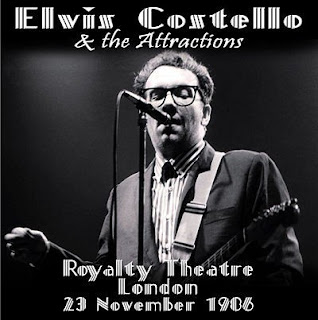 
1986 was a busy and productive year for Elvis. King of America, which he recorded in 1985 under the guidance of T-Bone Burnett (and was made without his regular band, The Attractions), was released in January 1986. Following a series of radio and TV appearances in early 1986 to promote the album, instead of going on tour, Elvis went back into the studio, this time back with the Attractions and old-pal producer Nick Lowe, to record another album. This new album, Blood and Chocolate, was more in the rock vein, and was made fast and loose (reportedly in a matter of days), with a raw, aggressive, and decidedly unpolished sound. A couple of stunning leftovers, 'Blue Chair', which was a holdover from the King of America sessions, and 'I Hope You're Happy Now', which was from the Goodbye Cruel World sessions, get new Attractions makeovers (to great results - 'Blue Chair' coulda/shoulda been a hit single) and are added to a roster of raw and intense new tracks. The result was a raucous, exhilharating, emotionally rich, dark, and somewhat depressing, but satisfying album. By July, Elvis and the Attractions were back out on tour. Oh yeah, he also got married (to Cait O'Riordan of the Pogues) around this time. For the Fall tour, Elvis devised a series of multi-night shows in key cities, first in the U.S, then in Europe, in which each night would feature a different show, where one night would be a show with the Attractions, one night a solo Elvis show, and one night a show backed by the Confederates (a group of studio musicians used on the King of America album). This culminated in a week-long stay at London's Royalty Theatre in October 1986. The first night (the show presented here) was with Elvis with the Attractions, and featured songs from the new Blood and Chocolate album. This was taped and broadcast (high quality recording) by the BBC. The second night (featured below) was a solo acoustic show with Elvis all by himself for a more intimate evening of talk and songs. The rest of the week continued with the nights alternating between Attractions and solo Elvis shows (The Confederates were not present on this part of the tour, but don't worry, I will have a show with the Confederates as part of the 1987 shows, coming soon). So, enjoy these next chapters in the development of Elvis and his music in the 1980's .

I've been dying for a glimpse into this period of Mr. C's concertizing.

Thanks for sharing and for the considered appraisal of his eighties work.