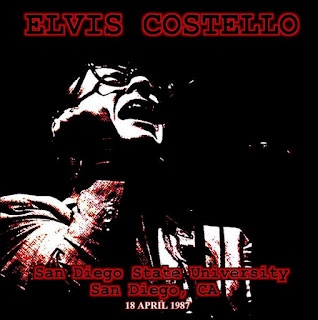 In April-May, 1987, Elvis went out on a short solo tour in the U.S. (generally w/ Nick Lowe opening and joining Elvis on 1 song -his own 'Peace, Love, and Understanding'). On this tour, which had a decidedly different atmosphere than shows with the Confederates, he introduced the 'Spinning Songbook', in which in the second half of the show (following his duet w/Lowe and a brief intermission), Elvis came out as 'Napoleon Dynamite' and acted as a kind of game show host. The Spinning Songbook was a big 'Wheel-of-Fortune'-type spinning prop containing song titles from Elvis's catalog. Audience members were selected and invited up on stage to spin the wheel, and Elvis would perform the songs determined by the wheel spin. In many shows, he also selected a member of the audience to 'play drums' on a couple songs.The atmosphere was very loose and carnival-like, Elvis and the audience seem to be having a lot of fun with it, but it definitely is one of those 'You really had to be there' kind of things, as on the recording it mainly comes across as a lot of talk and a sort of waste of precious concert time. Nonetheless it was another unique kind of show Elvis offered, and he delivers many interesting solo versions of new and classic songs here. Later in 1987 (Fall), Elvis would go back on the road (U.S., Japan, Australia) with the Confederates as his backing band and go back to the more folk and country-tinged shows he started the year with.
One other 1987 note: 3 London shows in January 1987 (1/22 to 1/24) just before the Confederates shows, were the last time Costello would play a show with the Attractions until 1994 (and the Brutal Youth Tour).


Notes -
- duet with Nick Lowe on Peace, Love And Understanding.
- audience member Carolyn on drums during "Everyday I Write The Book" and "Alison".
- EC with beatbox on "Uncomplicated", "Watching The Detectives", "Pump It Up".
- fades between "Radio Sweetheart" and "I Want You" and the Nick Lowe intro
- Pump It Up comes from a different recording of the same show, but fades out early at 5:12.