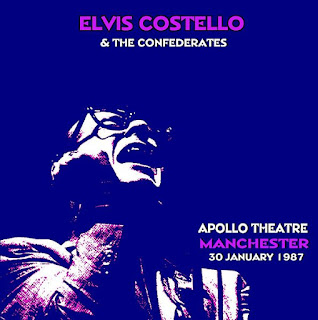 After finishing up his 1986 european tour (featuring both solo shows and Attractions shows) with extended UK dates in London, Dublin, Edinburgh, and Liverpool in December, Elvis went right back to the UK in January-February 1987 for more shows, this time backed by the Confederates, a group of American musicians (including James Burton-guitar, Jim Keltner-drums, Benmont Tench(from Tom Petty's Heartbreakers)-keyboards, and T-Bone Burnett) that he worked with on the King of America album. The Confederates had backed him on several dates on the 1986 US tour, but did not come with on the subsequent european tour. Elvis must have enjoyed the shows with them, because he invited them back for most of the 1987 tour. As would be expected, the shows with the Confederates focused much more closely on the King of America songs, as well as other country, folk and country-influenced songs. Here, then is a full-length show from Mancester, England that provides a very good representation of these shows with the Confederates.

Amazing concert, but i can't download it.
Can you help me please with some zippyshare or something like this?
I will really love to hear Elvis with Jim.
Here is my blog
http://jimkeltnerdiscography.blogspot.com/
Thank you.

sergej,
not sure what problem you are having. I checked and files and links all seem to be working correctly.

ah, one of my very best recordings....