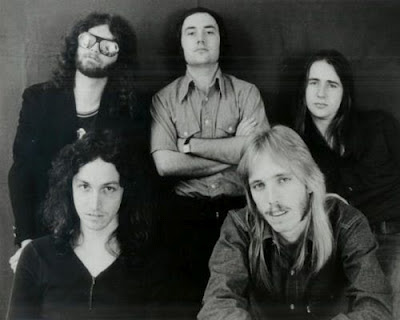 Tom Petty was born and raised in Gainesville, FL. His interest in Rock n' Roll was ignited at age 10 when he met Elvis Presley on the set of 'Follow That Dream', which was partially filmed in nearby Ocala, FL. He got his first guitar at 13, and after seeing The Beatles on The Ed Sullivan Show in 1964, Tom knew he wanted to be part of a band. The center of music activity in Gaineville was (and probably still is) Lipham's Music shop. Tom would hang out there (and also worked there for awhile), learn and jam with the other local musicians, such as Don Felder, who helped teach Petty guitar and piano, and Bernie Leadon and his brother Tom.  Petty's first high school band was 'The Sundowners', then he was in 'The Epics' with Tom Leadon, which was very popular at his high school (as was another high school band at that time, The Maundy Quintet, which featured future 'Eagles' Don Felder and Bernie Leadon). Then in 1970, Tom Petty and fellow 'Epic' member Tom Leadon formed 'Mudcrutch' with drummer Randall Marsh and guitarist Mike Campbell. The group became very popular on the local music scene, becoming the house band at Dub's, a local club, and playing frequently at UF. A bit later, Benmont Tench was added on keyboards (Petty met him at Lipham's Music while Tench proceeded to play the entire 'Sgt Pepper's' album on keyboards), Tom Leadon left the group in 1973, and was replaced by Danny Roberts. In 1974, Petty and the band packed up the van and headed West to find fame and fortune. Although they did sign a record deal with Leon Russell's Shelter Records later that year, their first single 'Depot Street' failed to garner any attention, and subsequent attempts at an album deteriorated, and eventually the band broke up in 1975. Petty then began working on a solo album instead, but realized that he really preferred the sound and feel of a real band as opposed to session players. In the meantime, Mudcrutchers Benmont Tench and Mike Campbell had re-grouped with some other Gainesville musicians, bassist Ron Blair and drummer Stan Lynch. So, when Tom dropped in on them and heard them play, he knew that this was the band that he wanted. Soon after, they began recording as 'Tom Petty and the Heartbreakers'. And, of course, the rest of the story, as they say, is rock history, as Tom and the Heartbreakers became one of the top American Rock n Roll bands. And Mudcrutch, of course, later gained worldwide recognition, when Tom in 2008 took the unusual step of taking a break from his current highly successful band, getting back together with his old, unsuccessful band (some 35 years later), and re-forming and re-connecting with his old Gainesville mates to record a new album and go on tour as Mudcrutch (which was then very successful). Here, however, we have Mudcrutch in their earlier days, in 2 very different live sets, one from 1971, the other from 1973. These are apparently the only known surviving live recordings from this stage of the group's history. And they represent very different aspects of the band's repertoire. In the first set (1971), they completely show their country and folk roots with this set of twangy country gems featuring plenty of pedal steel, etc.(this must have been part of a larger country-oriented show). The later, 1973 set, shows the band in pure Rock n' Roll mode, and shows how they became a very accomplished bar band, featuring straight-up rollicking Rock n' Roll jams and covers of classics by Chuck Berry, Elvis Presley, Buddy Holly, and more. Remarkably, these also are very good recordings (surprisingly good for this type of thing). Both shows were from the University of Florida campus, the first one in the Auditorium (probably part of a larger show), and the second from the local University bar, The Rathskellar, known as 'The Rat', where they set the place a blaze with good ol' throwback rock n roll.  So, please enjoy this look at Tom's early band, Mudcrutch, and a first look at the Gainesville Music scene.

Thanx for posting this! Been a Petty fan most my life, and love hearing stuff like this. Great blog.....lookin forward to future posts!

Can't wait to hear it. Thanks a lot.

The file has expired. Could you re-upload it? Thanks.

Link has been updated. Enjoy!