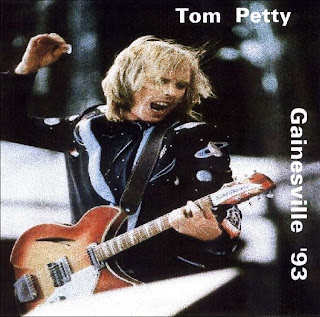 As mentioned in the previous post, following the break-up of Mudcrutch in 1975, Petty and fellow Mudcrutchers Benmont Tench and Mike Campbell, joined up with some other Gainesville musicians, bassist Ron Blair and drummer Stan Lynch, to become Tom Petty and the Heartbreakers, in 1976. But, even then, success was not immediate, and they still had some struggles ahead. When their first album was released in November 1976, it initially received little attention, selling only a few thousand copies over the first several months. They released two singles, 'Breakdown' and 'American Girl', and both failed to chart in the US. Apparently, people were confused, they looked like a punk band (the album cover photo especially), but the music was pure rock n' roll with a definite 60's throwback style. Fortunately for them, at least the UK seemed to 'get it', and they became popular there, with the album climbing to #24 on the British charts. Slowly, after news of their success in Britain, the album began picking up some interest in the US, finally entering the US charts almost a full year after its initial release. 'Breakdown' was re-released, and this time made it into the top 40. Shortly thereafter, their second album You're Gonna Get It! was released, and became a hit.right away. Although they were now becoming popular, more problems were coming up. During the recording sessions for their third album, their label, Shelter, was bought out by MCA, who then took over, which Petty didn't like at all, and he rebelled. MCA then sued him for breach of contract, Petty filed for bankruptcy, work stopped on the album, and MCA tried to take possession of anything that Petty had already recorded. The legal hassles continued for quite awhile, but eventually a settlement was reached, and Petty was signed to Backstreet Records (ironically, a subsidiary of MCA) and received a more favorable publishing contract. When his third album, Damn the Torpedoes finally was released in late 1979, it became an immediate breakthrough success, rapidly climbing to #2 (behind Pink Floyd's The Wall) and staying there for several weeks. Although the supporting tour got off to rough start when Petty lost his voice and had to cancel several shows due to tonsilitis, the band was now very successful, and many more hit albums followed, inlcuding Hard Promises (1981), Long After Dark (1982), Southern Accents (1985), and Let Me Up (I've Had Enough) (1987). In 1988, Petty took a break from The Heartnreakers and joined legends Bob Dylan, George Harrison, Roy Orbison, and Jeff Lynne as The Traveling Wilburys, to tremendous success. He followed that with what was deemed his first 'solo' album, Full Moon Fever (although all of the Heartbreakers played on it, as well as several 'Wilburys' and guests, and produced by Jeff Lynne), which became his biggest hit yet. In 1991, he returned to the Heartbreakers for Into the Great Wide Open, which continued where Full Moon Fever left off.
Back in Gainesville, the community was very supportive and proud of Petty's success. However, by the time I was there in the late 80's, there was also some growing resentment, that Tom had forsaken his hometown, that now that he had made it big, he rarely came back to his local fans and his roots there. Thus, the show presented here, from 1993, represented his homecoming to Gainesville, his first major concert there since packing up his van and leaving with Mudcrutch, almost 20 years prior to this. This show was just prior to the release of his greatest hits album (and while he was in the process of moving to a new label). The greatest hits album also included 2 new recently recorded songs ('Mary Jane's Last Dance' and a cover of Thunderclap Newman's 'Something in the Air'), both of which are included in this show. And the show was broadcast on the radio nationwide, in very good quality. So, here is Petty's triumphant, yet somewhat overdue, return to Gainesville. Although some of the circulating FM versions of the show are shortened substantially, this is the full show in all it's glory. The next phase of our Gainesville tribute.

Thank you for the link but it is impossible to get to the file (here in France) with this Hotfile.
Would it be possible for you to put it on another distributor, please ?
Thanks
Alex

Haven't seen this boot before! As always, thanks for sharing.

This is a wonderful concert - thanks for posting. Just one small niggle - the photo is from Live Aid in 1985.

Excited to hear this one.

Excellent 2 Disc set, But Beware it been repackaged 4 or 5 times,
With track listings jumbled up and Different front covers...

Great 2 Disc set. But Beware it has been out 4 or 5 Times, same track list but been jumbled up & with Different covers.