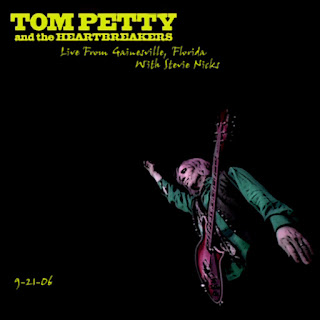 Here's one more Tom Petty/Gainesville show, this one commemorating the 30th Anniversary of Tom Petty and the Heartbreakers. It was another special homecoming for Tom and the boys, 13 years after their last Gainesville show. It was proclaimed "Tom Petty and the Heartbreakers Day" by the Gainesville mayor, and in a pre-concert ceremony each member of the band was presented a key to the city of Gainesville, as well as receiving the Uinversity of Florida Distinguished Achievement Award (regarding the key, Petty quipped "It's a lot nicer than the one we got in Chicago"). The concert itself, held once again at the O'Connell Center at the University of Florida, sold-out quicker than any event there ever, with all tickets sold in about ten minutes. And it was a very special event. Not only did it commemorate their 30th Anniversary, but they also had Stevie Nicks as a special guest to sing on several songs, including Tom and Stevie's hit duet performance of "Stop Draggin' My Heart Around". So, here it is, another magical homecoming concert event for Tom and the city of Gainesville.

Thanks so much for posting this! I have the DVD (which has wonderful sound) and have often thought 'how lovely if I could listen to that on the iPhone,' Now I can!

Correct artwork from the actual gig too - well done.

A true soundboard sound. Thanks.

Any chance of a re-up? It is gone. Thank you for so much musical enjoyment you have given.

Any chance for a re-up?
Please