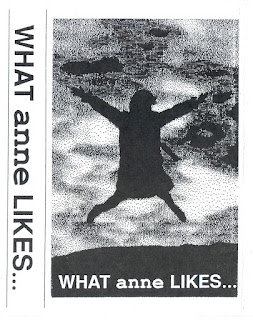 Continuing with my look at Gainesville, FL, we now shift to the late '80's (the time period I was there) and a relatively thriving music scene, where bands played at places like The Hardback Cafe, MFP, and Simon's among other constantly changing venues. I guess most of the bands would be generically termed 'alternative', but there was a wide variety of styles. For me though, the band that most set the tone for the Gainesville music scene at that time was a band that only rarely even played live, but when they did, it was an occasion worth celebrating. That band was 'Vulgar Boatmen', but more about them later. Today, I feature something a bit different. Unlike Tom Petty, or Don Felder and Bernie Leadon, who went on to musical fame and fortune after leaving Gainesville, today I am featuring a completely obscure Gainesville band that popped up in the late '80's, played for awhile, self-released a single cassette-only album, then, as far as I know, dissappeared. They were called 'WHAT anne LIKES...', and they were a really fun, spirited, and quirky band, that I really enjoyed at the time. They merged many styles, sounds, and influences, but basically, were just a lot of fun. Lead by the songwriting/performing team of Bill Stephenson and Ned Davis, they featured a bright, driving guitar, with songs highlighted by Bill's trumpet and/or horn arrangements. And I found that, over the years, I kept coming back to play that one cassette of theirs, because it was just really cool. Anyway, that cassette was independently released by the band in 1990. I left Gainesville soon after that, so don't really know what happened to the band, which was composed primarily of UF students or possibly graduate students, but never heard anything more about them. In doing a web search for them, I did find an old website (but very little else), consisting of a single page, that indicated they were planning a new album, but that they were going through changes, with Ned and Paul leaving the band. Don't know what year this was from, but apparently quite awhile ago. I do know that drummer Jonathan Isley joined up with Vulgar Boatmen shortly after they released their cassette. Anyway, their cassette release, which, as far as I know, has been completely unavailable anywhere since shortly after 1990, is very good, and worth checking out for a number of reasons. Although their original songs are very good and quite memorable, for many, it may be the covers included here that attract the most attention. For fans of Elvis Costello, there are actually 2 stunning covers included here, first, an outrageous mash-up of Costello's 'Pump it Up' and George Clinton's 'Atomic Dog' called 'Funk it Up, Dog!', then a gorgeous re-invention of one of Costello's most obscure songs, 'Poison Moon'. This song was only available as an unfinished, underdeveloped demo recording from Costello's early home tapes, But WaL has enhanced and polished it up to stunning effect, and a finished song that I'm sure even Elvis himself would fully appreciate. Anyway, here is WHAT anne Likes, from 1990, and another part of Gainesville's interesting history. I realize that this is really obscure stuff, but for the adventurous downloader, this is some really interesting stuff. Admittedly, the sound and recording are not very polished, but it has great drive, spirit, inventiveness, musicality, and humor. Give it a listen.

(BTW, if anyone associated with WaL is still out there, let me know, I'd love to hear from you. My purpose in posting this is to let more people hear the music they created, but if anyone connected with the band objects to posting this opposes this, I will remove it. thanks.)

Fascinating. Is the Hard Back Cafe in Gainesville the same thing that's referenced in the Ben Folds song "Where's Summer B.?" he says "The Hard Back Cafe closed down/Now we've got office town". Less off topic, I do rather like this tape. Nice up, thanks!

Hi Mason,
Thanks for your comment. Glad you like the WaL tape. As for Summer B, it's doubtful that it specifically refers to Gainesville's Hardback Cafe, because that song came out on BFF's first album in 1995, at which time the Hardback was still very much open and active. The Hardback Cafe in Gainesville was around from 1989 to 1999, as far as I can tell (I was there when it first opened, and it very quickly became 'The' place for live, original music in town). Ben's song (written by Ben and Darren), apparently refers to their friend Summer Burke, and mentions other friends of Darren, so I would guess that it refers more to places in wherever Darren and/or Summer are from. I don't know that any of them ever really hung out in Gainesville. Although it is certainly possible that they took the name from Gainesville's renowned Hardback Cafe, even if it was not in the town they describe or did not actually close down at that time - artistic license perhaps? Anyway, thanks, and stay tuned for a few more Gainesville music memories.