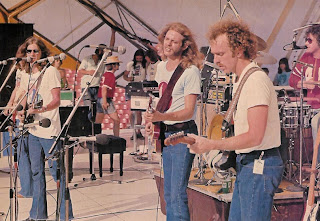 Like Tom Petty, Don Felder was born and raised in Gainesville, FL, and started playing guitar at around age 10. Being a couple years older than Petty, Don was already a good guitar player when he started his first band at age 15, The Continentals, which also featured another young guitar player by the name of Stephen Stills (Stills was a military kid and his family moved around quite abit, but happened to be in Gainesville for some of his high school years). In 1964, another young guitar-banjo-mandolin player, by the name of Bernie Leadon, also moved to Gainesville for his later high school years (his father was an Aerospace Engineer, who took a faculty position at the University of Florida there). Although Bernie was more partial to country and bluegrass music, and Don was rock n' roll, Don and Bernie became good friends (hanging out at Lipham's Music), and when Stills left the band soon after that, Bernie came in to replace him. And at that time, around 1965, the band's name changed to the Maundy Quintet. Over the next couple years, Don and Bernie's Maundy Quintet and Tom Petty's The Epics were noted as the best of the local high school bands. By 1967, they had finished high school, and Bernie head off to the west coast to join some other friends there and check out the California music scene. Don headed to New York to join a band called The Flow. Of course, Bernie's California adventures soon lead him to stints with country-rock pioneers Dillard and Clark, The Flying Burrito Brothers, and ultimately the Eagles. Don's band had fallen apart, and he did various session work and gigs. But then in early 1974, as the Eagles were beginning to really take off, Bernie gave Don a call to join them to add some slide guitar to a song they were doing ('Good Day in Hell') to finish up their next album (On the Border). The band really liked Don's guitar work and style, and after playing for them just one day, The Eagles asked Don to join the band, which, of course he did, and from then on The Eagles were a quintet. Don's harder rock guitar sound fit in well with the more rock-oriented direction the band was interested in (well, all except Bernie) at the time. So, for the rest of 1974 and 1975, Bernie and Don were both part of the Eagles as they became a superstar band. Not surprisingly, there are no recordings of Don and Bernie from their Gainesville days, but, of course, there are many from their Eagles days together. This is a show from the 1975 tour. But, of course, Bernie and Don's days together with the band did not last that long. Tensions were mounting between Bernie and Don Henley and Glenn Frey, as Bernie's style and music were being pushed to the back ground and Henley and Frey took greater control of the band, their style, and marketing. The division between them was never more obvious than on the One of These Nights album (1975), where most of the album contained a much slicker, pop sound (designed for top40 radio), whereas Bernie's 2 songs, the cosmic Banjo instrumental 'Journey of the Sorcerer' and the folkie 'I Wish You Peace', stuck out as out of place from the rest of the album. Tensions mounted through the 1975 tour, This show, from Summer 1975, was near the end of Bernie's run with the band, as just a few months later, Bernie would infamously pour a beer over Glenn Frey's head, and walk away from the band for good. Bernie was rather quickly replaced by rocker gutarist Joe Walsh. Don would stay with the band for many years, but certainly not without drama of his own. When the Eagles officially broke up after a particularly contentious concert in Long Beach in July 1980 (where Felder and Frey were constantly bickering and threatening each other all through the show), it certainly looked to be end for them. But then, 14 years later, in 1994, The Eagles re-formed, and invited Don back into the band (but not Bernie, because he had quit them), and Don continued, albeit rather unhappily, until he was fired from the band in 2001. Lawsuits and allegations followed, and eventually, Don wrote and published a rather scathing 'tell-all' book about his time in the band titled 'Heaven and Hell: My Life in the Eagles'. Although Bernie kept active in music, he maintained a rather low profile in his years after the Eagles, preferring to just play in other's bands and do session work, etc. He has had two solo albums and worked with countless other groups, especially those of friend Chris Hillman, but has never really sought the kind of stardom he had with the Eagles. Don, also has done mostly session work and miscellaneous gigs, since leaving the Eagles. But, here they both are, hopefully in happier times, as part of the Eagles. So, here for the next part odf our tribuite to Gainesville, FL, are Gainesville High School's own, Bernie Leadon and Don Felder (and some other guys) in The Eagles in 1975.

i just finished that felder book last week - oooo did he get played by frey and henley, helped by the fact that azoff (df's mgr simultaneously) stabbed him in the back.
too bad he didn't aspire more ambitiously to 'successful' solo work the way that frey and henley did or azoff might've plugged for him too.
felder also could've stuck less adamantly to his principle that 1/5 was what they'd ALL had immediately after he joined them and reconsidering and then taking the 1/7 (at the reunion) w/o squawking the way he did.
i'll have to give this a try - thanks!

Hello, I can't figure out how to listen to this? Thank you

Sally,
First download the rar file, then extract the mp3 files from the .rar files using a file extraction program (such as winrar, 7zip, etc.) that can handle .rar compressed files. Once extracted, you can play the resulting mp3 files on your media player as usual.