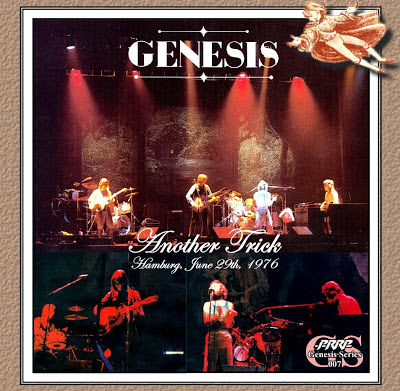 
Continuing with this series of hard-to-find PRRP Genesis recordings, here is a fine show from the surprisingly triumphant 1976 Trick of the Tail Tour. Following the much-publicized departure of Peter Gabriel at the end of the Lamb tour in 1975, Genesis faced it's toughest challenge. Most fans and critics thought the band was essentially finished without enigmatic frontman Gabriel. Yet the remaining quartet already had a wealth of strong new songs and head right back into the studio to work on their next album, albeit without a lead vocalist. Although a search for a vocalist was conducted, they could not find anyone they all thought would work out. And even the rest of the band was dubious whether drummer Phil Collins had the chops to successfully fill that role. Collins previously had mostly done background and harmony vocals, and although everyone knew he had a soft, pleasant, and sweet voice, no one thought he would be right for the louder, more aggressive, growlier songs. But, left with few options, they gave their bandmate the chance, and he succeeded beyond all expectations, and well the rest is history. The album came out in early 1976 to nearly universal accalim, praised by fans and critics alike, and continued their string of top-notch albums without missing a beat. The only question now was, could their live show live up their previous high standards? For the live shows, they needed to add a drummer, as Phil was now up in front singing for most of the show, so they recruited the exciting and dynamic Bill Bruford (of Yes) to fill-in and provide the needed drumming presence. Without Gabriel, they did away with the costumes and theatrical aspects of the shows, and concentrated on the music, although continued with the introductory stories before songs, and enhanced the stage show with state-of-the-art lighting and effects. The first Genesis live show with Phil as singer took place in London, Ontario in March 1976. The show was an unqualified success. By the time Genesis reached the Congresshalle in Hamburg on June 29, 1976, they were on the final leg of a triumphant five-month world tour. Having defied all expectations and proven their sternest critics wrong, they had done the seemingly impossible – not only did they survive the departure of the Peter Gabriel and produced a masterful classic Genesis album, but they were more popular than ever. Now, I know that there are still many 'snooty' so-called Genesis fans that claim they only like Genesis during 'the Gabriel years', but I firmly believe that the split came at the right time and was best for all concerned, with both Gabriel and Genesis growing and probably producing much better music than if they had tried to stay together unhappily. And the fact is that Genesis remained a great progressive rock band for at least a couple more years after the split. Really, it was when Steve Hackett subsequently left after the 1977 tour that there was a serious toll on the band and its musical direction. There was enough talent and creativity in the group that they could survivie the loss of Gabriel, but the combined loss of both Gabriel and Hackett was just too much, and forever changed the group's music, style, and following. But, here in this 1976 show, we can enjoy and appreciate the great band that Genesis was, even without Gabriel.

Great site. I'll be glad to link to it if you would set up a link to my site: http://so-many-roads-boots.blogspot.com/

Great blog !
Thanks a lot for these golden oldies. I like this period of Genesis better than the Gabriel one. Great tunes and inspiration.
Cheers !!

the sound is not very good only 6/10 for sound

Speedy, Thanks. Yes, I enjoy your site, too, so, link: Done.

Malcolm, This recording is listed as A- by the Genesis-movement site, and although I would call that overly generous (I would rate it at about B to B+), it is much better than a 6/10, I would give it a 7.5 or 8/10. certainly not one of the best of the PRRP series, but still a fine audience remaster. For some of the very best Genesis boots, see the earlier article listing the best from each year.

Thanks for the link! Just added your to my blog!