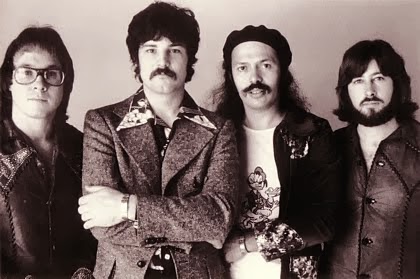 Here's one more Guess Who show. This one comes from their 1974 Flavours tour and features a nice mix of songs from their then-recent albums (Flavours, Road Food) and their older classics. Although this show is sourced from a soundboard recording, it appears to come from an old low-quality cassette recording, as several limitations and artefacts from a deteriorating cassette tape are apparent in the sound quality, so it has decent, but not great sound. However, it's well-worth checking out, as it's a very good performance and contains a few different songs from other shows from this period (1974-75) previously featured. So, once again, since there are so few good quality live boots of classic Guess Who available out there, I feel compelled and obligated to pass along any and all decent Guess Who recordings so that they will be available to all. So, here again are The Guess Who in fine form in 1974.

BBKron
Wow!! Been Searching for this for years!!
What a great show this was to be at!!
Burton Cummings was in excellent form, and Troiano was simply superb!!

I also was at this concert and it was the best. I moved to Winnipeg in 1980 and tonight I just got home from a concert with some of the best Winnipeg musicians along with the Winnipeg Chamber Orchestra and would you know, Bill Wallace right in the thick of it. I remember him from the CNE concert like it was yesterday. A great musician but I have to say ,being a teenage girl it was the long hair and buckskin suit that did it for me lol.

This was my first rock concert ever. Borrowed my dad's car to travel into Toronto but slid through an intersection in the rain north of town and cracked it up on the morning of the show. After the wrecked car was towed away and the police finished their citation writing I was a long haired 17 year old hitch-hiking with my buddy, Paul, to get to the show. We made it in one piece. Super impressed to see the band get dropped off in front of the stage in long white limos. Settled in and rocked the show. Remember Burton Cummings commenting that he was dusting off cob webs to sing These Eyes. Seems like 8 millions years ago ..... also seems like yesterday. Thanks for posting this time capsule.

Un,
You're lucky to have gotten to see them in those years. I never got the chance. However, your suggested revised dates still don't work. Winter and McDougall were gone from the band by the end of June, 1974, immediately after their Spring 1974 tour (wrapped up June 1974). The band then went right back into the studio in July 1974 to record Flavours, with new guitarist Troiano. And they were back out on the road by the end of August 1974, which was when this show was, with the new band lineup and new songs from Flavours (although the album wasn't released until October 1974). This show was definitely not from 1975, as that would have been after Power in the Music was released (July 1975)and would feature some songs from that album. So, I have to stick with 1974 as the correct date and part of the Flavours tour. Glad you enjoyed the show.

BBKron Your are right , I was there . I remember because my purse was stolen from me 1 week before the concert. It had my tickets in it but I had written down time ,date ,seats ... Talked to cops and they said they would go with me to see if people showed up in my seat ,yep lol sure enough they did . Plus they broke up in 75 . Well Burton left in 75. The concert referred to here is def 1974. Wallace had on a buckskin suit :)

Does anyone remember who the opening act was this night ???

I don't remember them having a opening act so I looked it up . From the 27th to Sept 1st. The band who had a opening act all had the opening band named. Guess Who ,Chicago... Don't have one listed ...August 27 - The Stylistics, Robby G. Griffith, George and Gwen McCrae; August 28 - Bachman-Turner Overdrive, The Beach Boys; August 29 - De Franco Family, Susan Jacks; August 30 – Osmonds; August 31 - Guess Who; September 1 – Chicago; .