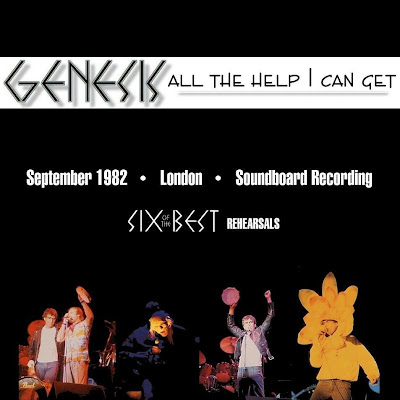 Genesis
"All The Help I Can Get"
September 29, 1982
Hammersmith Odeon, London, UK
(Upgraded quality version - Repost)

While I am updating all the old, dead links, I've taken this opportunity to upgrade the quality of some of them most in need of it. So, here is a re-post of a unique Genesis performance that was first posted here way back in 2008. This, of course, is the soundboard recording from the only rehearsal session prior to the one-off 1982 Genesis Reunion Concert at Milton Keynes, UK on 10-02-1982. For those that don't know, this was an impromptu 'one-time-only' reunion show, in which Gabriel got together with his former bandmates, presumably to help get Peter out of debt after getting the WOMAD festival established earlier that year. The performance from that memorable concert event is available on various bootlegs (as 'The Lamb Woke Up Again', 'Six of the Best', 'Live from Milton Keynes'), of which the best available recorded version has also long been made available (in best quality) on this blog here previously. As others have commented previously, the performance from that show is a bit shaky in spots (due to lack of preparation time and rehearsal), but it remains the only time Gabriel has re-joined the band onstage to date, certainly a one-of-a-kind event. Unfortunately, all the known recordings from this show are fairly mediocre audience recordings, certainly worth having, but not the best quality. But here is a somewhat better quality recording of the rehearsal session (9-29-82) prior to the concert.
I commented previously regarding the uniqueness, worth, and quality of this session and recording, but suffice it to say that it certainly is a 'must-have' for fans of the band, and particularly for those that prefer the days when Gabriel was present.
And now, for the first time, I have obtained these files in higher quality versions than was available previously. Normally when I provide an upgrade such as this, I just update the original post and don't bother re-posting it as a 'new' entry. However, I thought the new availability of these upgraded versions deserved a post of their own to make everyone aware. So, if you had not obtained this show previously, by all means do so now, and even if you previously obtained this from here or elsewhere @ 192k, then it still is well-worth it to download these upgraded quality files for this unique rehearsal event in Genesis history.

For more details and info regarding the session and performance, see original post info here