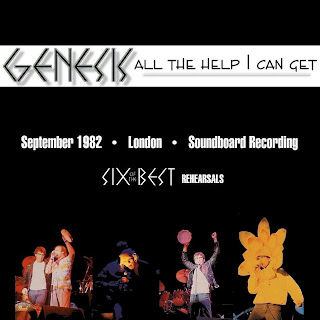 Genesis
"All The Help I Can Get"
September 29, 1982
Hammersmith Odeon, London, UK

Well, here it is, the recently-surfaced soundboard recording from the only rehearsal session prior to the one-off 1982 Genesis Reunion Concert at Milton Keynes, UK on 10-02-1982. For those that don't know, this was an impromptu 'one-time-only' reunion show, in which Gabriel got together with his former bandmates, presumably to help get Peter out of debt after getting the WOMAD festival established earlier that year. The performance from that memorable concert event is available on various bootlegs (as 'The Lamb Woke Up Again', 'Six of the Best', 'Live from Milton Keynes'), some available elsewhere on this forum. As many have commented, the performance from that show is a bit shaky in spots (due to lack of preparation time and rehearsal), but it remains the only time Gabriel has re-joined the band onstage to date, certainly a one-of-a-kind event. Unfortunately, all the known recordings from this show are fairly mediocre audience recordings, certainly worth having, but not the best quality. So, now here comes some higher quality tapes of the rehearsal session (9-29-82) prior to the concert. Now we have a better document of this unique time and concert experience.

I've been trying to get hold of these ever since I first heard about them. The assessment: Yes, these are a marvelous documentation of this event, and the sound quality is much better than the tapes of the actual concert I've heard. It is fascinating to hear this behind the scenes glimpse at them running through these songs for the first time in many years. However, as with the concert itself, these are far from their best performances, and perhaps because this IS just a rehearsal, some of the performances are a bit lackluster. Gabriel, in particular, is notably rusty and somewhat lost in some of the older songs that he hadn't performed in years ('Supper's Ready', 'Musical Box', and 'The Knife'). The sound quality also is not as good as one might hope, not as crisp, clean, or clear as the best soundboards, uneven mix, and the volume seems to fade in and out somewhat sporadically. Not that I'm complaining, as I am thrilled to get the chance to hear these sessions after all these years. Make no mistake, despite the flaws (and maybe even partly because of them), these tapes are a rare find and a 'must-have' for any serious Genesis or Gabriel fan. A big thank you to whoever was responsible for bringing these tapes to the public.

BTW, for whatever reason, apparently Steve Hackett was not part of the reunion plans, and does not appear at this rehearsal session. However, Steve did show up at the actual concert, and joined the rest of the band for the encore ('The Knife').

Gracias por esta joya Dude!
(Thanks For This Dude!)