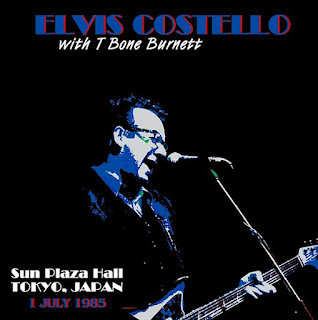 
In 1984, in addition to his tour with the Attractions, Elvis also did a limited number of solo shows for the first time (Unfortunately, most of the recordings from these early solo shows are not very good). He continued these shows in 1985, doing a series of shows, mostly solo, but including a segment as a duo with T-Bone Burnett (and billed as the Coward Brothers). By this time, Elvis was in the midst of recording what would become his next album (Produced by T-Bone), King of America, without the Attractions, a knockout album of American Roots-oriented music (folk, rockabilly, etc.), personal and heartfelt, that continued his development as one of our finest songwriters and performers, and marked his 2nd masterpiece album of the 1980's. Here then is one of those 1985 solo shows, which previews a few of the new songs from King of America, as well as a wide variety of solo versions of both well-known and little-known Costello songs, and even features Elvis on piano on a few songs. Once again, these FLAC files come to us through the folks at the The Elvis Costello Wiki (http://www.elviscostello.info/wiki/index.php/Main_Page), so much thanks to them for making this available.

Notes -
- EC is unamplified during the first half of "Pump It Up" so the first 45 seconds is mostly screaming fans.
- includes one of five (known) performances of "The Wild Side Of Life"

It's too bad this great performance is so often marred by the clueless audience mechanically clapping along en masse whether appropriate or not -- Riot Act?! At least later in the show they get off the straight 1 2 3 4 and clap on the downbeat. Still, it's a shame. Thanks for posting though!