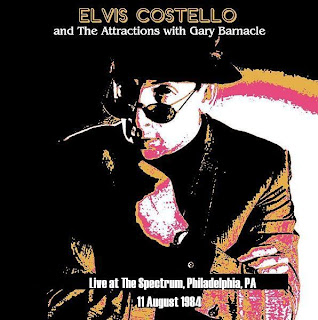 Here's an excellent radio show from the 1984 Goodbye Cruel World Tour. Although GCW, the album, has been harshly criticized (primarily due to Langer and Winstanley intrusive and annoying pop production style), I actually have always really liked it, as it has several great songs that should have gotten more attention and repeated play on subsequent tours ('Inch By Inch', 'Deportees Club', 'Sour Milk Cow Blues', 'Worthless Thing', 'The Comedians', and 'Peace In Our Time' are classics). Regardless, though, the 1984 tour was great, as the production issues with the songs were not a problem, and it was the only chance to hear many of these songs live. With sax player Gary Barnacle added for this tour, the songs get a lttle fuller sound, but not the full horns treatment of the previous tour. In addition to the GCW songs, a particular highlight was Elvis's cover of the Byrd's 'So You Want To Be A Rock 'n Roll Star'. I have always had a particular fondness for this tour, because it was the first time I saw Costello in concert, and I was mightily impressed. Nick Lowe and His Cowboy Outfit (which also featured Paul Carrack and Martin Belmont) opened the show. That show was also the only time I have ever hung around after a concert waiting to try to see or get an autograph from a performer. Eventually, The Attractions and Elvis did come out to greet the fans and sign autographs, and it was pretty cool seeing them interact with fans.
Anyway, this particular show, in various forms, has been the source of a number of different bootlegs over the years. Unfortunately, none of them are complete. Although 28 songs were played, the known bootlegs contain anywhere from 11 to 23 songs. The one I have (which is the most complete I have been able to find) comes from a WLIR broadcast and contains 19 songs. A great-sounding 23-song version (which appears to be all that were recorded for radio) is available as streaming audio at Wolfgang's Concert Vault (http://www.wolfgangsvault.com/elvis-costello-and-the-attractions/concerts/spectrum-august-11-1984.html), but I haven't been able to track down the downloadable audio files. Additional songs that were played, but not on this recording are 'Shabby Doll', 'Worthless Thing', 'I Hope You're Happy Now', 'King Horse', 'Young Boy Blues', 'Home Truth', 'Riot Act', 'Peace in our Time', and '(What's So Funny 'Bout) Peace Love, and Understanding?'). Although only a partial show, still excellent.
For a full show from this same period (and similar setlist), check out the 2nd show posted from 1984, a full lossless recording of the 8/21 Worchester, MA show, indicated in the post below and available through the Elvis Costello Wiki site (links below).

Tracklist:
01 Let Them All Talk
02 The Greatest Thing
03 Mystery Dance
04 Girls Talk
05 So You Want To Be A Rock 'N' Roll Star
06 I Wanna Be Loved
07 Sour Milk Cow Blues
08 Lipstick Vogue
09 Watching The Detectives
10 Shipbuilding
11 Beyond Belief
12 Clubland
13 Inch By Inch
14 The Deportees Club
-- Encore:
15 Everyday I Write The Book
16 The Only Flame In Town
17 Getting Mighty Crowded
18 Alison
19 Pump It Up-Ain't Got A Lot of Love-Tears Tears and More Tears-Intros-Pump It Up