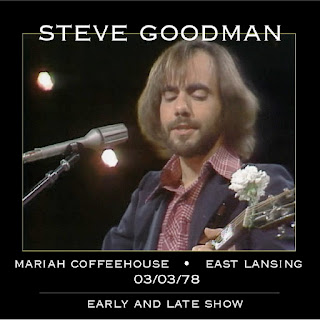 Yes! Even more from the wonderful singer-songwriter-storyteller Steve Goodman. And this time, it is a full evening of entertainment from Steve (and backed up by the great Mandolin player Jethro Burns), with both complete sets (early and late shows, each 80 min) in very good sound quality from this Spring 1978 night at Mariah Coffee House in East Lansing MI. That's a whopping 2hr.40 minutes, 44-plus songs from Steve, and in the 2nd set he only repeats 4 songs from the earlier set (all of which are with Jethro), so the second set is mostly completely different from the first, for a grand night of fun from Steve. OK, it might be a bit too much for non-fans (try the previous compilations for a good intro to Steve's wit, style, and songs), but for real fans, this is a rare treat to get such a long, full show in it's entirety. Enjoy.

Hi, can't say I've heard of this guy, but I'm always willing to give my ears a try to new sounds. Thanks for the sign post.

I saw Steve Goodman in Lansing in 78 or 79 I believe, in a larger auditorium as a warm up for comedian Steve Martin (King Tut & Wild and Crazy Guy era.) The audience was not in the mood for folk music, so sadly they booed Goodman off the stage in order to get to Martin. I liked both, but matching them in one show didn't work for Goodman.

I was at both of these shows. Can you please tell me how to get copies?

musicj48912@yahoo.com
Please contact me, I would love to get copies of both of the shows.

Contact me at SSchus87@gmail.com. somewhere I have copies of both of these shows as well as other SG material.