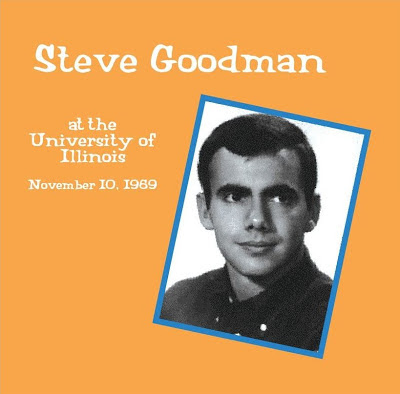 
Here is some more from the irrepressible Steve Goodman. These represent some of the earliest known live recordings from Steve. Here is Steve back when he was just starting out, and was more of a traditional folk artist, primarily performing old standard folk songs in a traditional style, before he became known for his own songwriting and performing style (for more info on Steve and his music, see previous Steve Goodman posts here). I would not recommend these shows as an introduction to Steve, as they do not give an accurate depiction of what he became known for, his own inimitable songs and style. However, for fans of Steve, these are interesting to hear to see where he started from, and how his style changed. It is also interesting to hear Steve perform The Beatles 'Eleanor Rigby' and Jefferson Airplane's 'Somebody To Love' (in his extended medley) done in the style of traditional folk songs here.

Lovely quality for this early early stuff! Had no idea there was this stuff around and only came across Goodman thru' John Prine but this is truly worth having. THanks!

All these Steve Goodman postings are priceless! I was able to meet Steve in Rochester, NY in the Spring of 1972 when he played at the Golden Nugget. I was in my first Record Store job in one of the newest and biggest Malls in Western NYS and was the buyer. I had discovered Steve iun my reading about singer-songwriters as i was a fan and budding writer myself.

I was also good friends of the club owners and we carried their tickets so I got in free. Steve was billed as the opener for the New York Rock 'n' Roll Ensemble the group that spawned Michael Kamen (author of Bryan Adams #1 smash 'Everything I Do', orchestrator for Metallica & Pink Floyd and composer of the soundtracks for Lethal Weapon series). The NYRRE were a gas and fine folks, too.
The WEEK (Tuesday-Saturday) saw me there every night talking and drinking with both the band and Steve. Every night after the NYRRE finished their prepared set Steve got up and played current & old Rock 'n' Roll tunes like Born To Be Wild ( I wish I could recall more titles...there was one night it was broadcast & recorded on WCMF-FM 96.5 wish I knew where THOSE tapes were!)
I gave Steve the first DR. Hook LP because we connected on Shel Silverstein. While he was there he met the gal who gave him the story for 'Ballad Of Penny Evans' who later turned out to be a fraud (but as Steve later said at least he got a good song out of the tale).
During the week we also drove him out to a Catholic grade school where a friend of mine taught. He was another singer-songwriter who had learned 'City Of New Orleans' off a John Denver LP (where Denver had 're'-written some of the lyrics). HIS WHOLE CLASS OF THRID GRADERS KNEW THE WORDS. Steve had a real special moment when that happened.I clould still take you to the location of every diner we ate at after every show that week.

I saw him ALMOST every time he came to town after that except for the NEXT time when I was in jail. I sent him a bottle of Remy Martin cognac in my stead. My teacher friend went and recalled later some student was asking him questions as he walked up into the rather oddly set up cafeteria/auditorium with a LOT of posts blocking views. She asked (as was the style of the times"What Sign are you?" and Steve, looking around at the bullshit set-up said'Feces, honey, FECES."
Thanks of r ALL these posts.

Thanks for the Steve Goodman posts on this site! Could we get a re-up for this one?

James,
Links have now been updated. Thanks for your interest in the incomparable Steve Goodman.