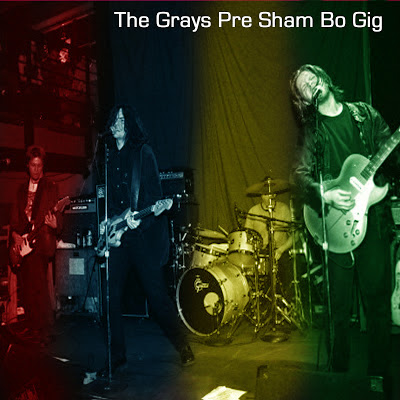 Here's some more from The Grays, a very short-lived Power Pop supergroup, this time with a rare live recording from before the release of their only album (Ro Sham Bo, 1994). Not only does this include songs that were not on their album, such as 'Strings' and 'I Go Astray', as well as 'Oh Nevermind' and 'Blessed' (which were featured on the previously posted rehearsal boot), but this also represents one of the only decent-quality live concert recordings of The Grays known to exist. Unfortunately, I do not have any further info regarding where or when this show took place (but much thanks again to Willard's Wormholes for making this available, and Jay Strange, who originally sent it to Willard). So, once again, here's a chance to hear more from the brief but enticing musical legacy of The Grays.

The link does not seem to work. Can you assist me please?

Robbie,
Sorry, checked it several times and link seems to work fine. Must be a problem at your end. Try again.

Any chance for a re-up on your Gray's boots? I can't believe these exist.