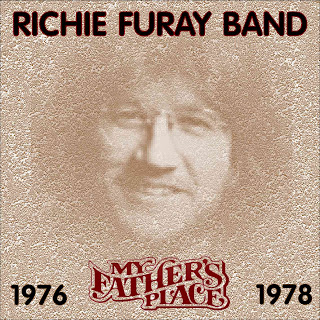 I've featured shows from his various legendary bands (Buffalo Springfield, Poco, Souther-Hillman-Furay), as well as solo shows from most of his famous bandmates, but shows highlighting this iconic, but sadly, nearly-forgotten singer-songwriter by himself (or with his own band) are very scarce and much less well-known. But here he is, Richie Furay, with his trademark smooth tenor vocals, in 2 different shows (and with 2 different versions of the Richie Furay Band) from My Father's Place in New York in 1976 and 1978. Furay was a founding member of Buffalo Springfield in 1966 along with Neil Young and Stephen Stills, and after BS disintegrated within 2 turbulent years, Furay, inspired by Springfield's ocasional forays into country-rock, was determined to put together a full-fledged country-rock band. So, in 1968 he formed Poco along with Jim Messina and Rusty Young. Furay lead Poco through 6 albums between 1969 and 1973 (and arguably their very best stuff), but then, frustrated with their lack of commercial success, left to form the Souther-Hillman-Furay Band 'supergroup' at the suggestion of David Geffen. But SHF was also short-lived and failed to live up to commercial expectations, and by mid-1975, also disbanded. Souther, Hillman, and Furay each then pursued various solo projects, with Richie releasing albums in 1976 (I've Got a Reason), 1978 (Dance a Little Light), 1979 (I Still Have Dreams), and 1982 (Seasons of Change) that were increasingly influenced by his recent coversion to evangelical christianity, and met with decreasing success. By 1983, Richie left the world of rock music and performing behind to become a full-time pastor of a small church in Colorado, where he still continues to thrive almost 30 years later. For despite being an important and influential singer-songwriter and a major part of what I consider to be three great bands, Richie had a frustrating career and never really acieved the knid of success he deserved (despite their legendary status, neither Buffalo Springfield nor Poco were commercially successful in their time - Buffalo Springfield had only one hit 'For What It's Worth', and Furay's Poco, despite putting out classic songs like 'Pickin Up the Pieces', 'You Better Think Twice', 'Kind Woman', 'C'mon', 'Bad Weather', 'A Good feelin' To Know', and 'Let's Dance Tonight' never had a hit single or album). Richie did return for occasional forays into his rock n roll career, participating in a reunion of original Poco members for the album Legend in 1989 (and which yielded a successful single, 'Call It Love'), as well as other periodic shows guesting with Poco over the years (notably a live album and DVD in 2004). He also released a couple of christian devotional albums (1997, 2005). That must have re-kindled his interest in Music, because by 2006, he had formed a new band and released an album that marked his first return to country-rock style music in over 20 years (The Heartbeat of Love), and was followed by extensive touring, and then a live album. He then hooked back up with Poco in 2009 for several shows. Which all lead to a culmination of the long-awaited reunion of Buffalo Springfield in 2010 and shows in 2011. Unfortunately, additional Buffalo Springfield shows tentatively planned for 2012 never came to pass (Neil probably lost interest).
Presented here are a couple of shows from the RnR Hall of Famer from the tours for his first and second solo albums, in 1976 and 1978 respectively. But both shows also contain several songs from his other bands as well, with the 1978 show, in particular, being a wonderful review of many of his most famous songs. These both come from FM broadcasts, so the quality is pretty good. The compiler of these shows also added on an additional song from the Buffalo Springfield days at the end of each show to fill out the length. They don't quite fit in very well here (it would have made more sense to include something live from Poco or SHF), but I have kept them in, so you can choose for yourself whether to keep them or not. I received these shows a while back from David B., a reader of the blog who generously sent these to me, and I have not seen these available anywhere else, so much thanks David, these shows help fill a notable gap in Richie's illustrious career, and I am very happy to be able to share them.

thank you for this show...

you have some great rare music that you are sharing.Thank You.