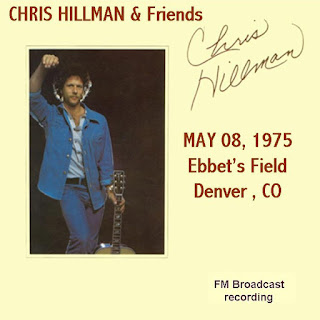 Here's another fine show from what I refer to as Chris's 'Firefallin' Burrito Brothers' tour. This was a quite early show on this tour, which took place immediately after the Souther-Hillman-Furay Band called it quits. Chris called up friend and former FBB alum Rick Roberts, who had recently formed a new band, called Firefall, which was practicing and playing together but did not yet have a record deal or made public performances yet. So, Roberts, along with his Firefall mates guitarist Jock Bartley (who also earlier played with Gram Parsons), bassist Mark Andes (formerly of Spirit), and ex-Byrd-Burrito Michael Clarke joined Chris to form the temporary and hastily put together band later dubbed the Chris Hillman Band, but here only referred to as Chris Hillman and Friends, for this series of concert dates in the Spring-Summer of 1975. These shows became most famous, however, for being the launchpad for Firefall, as towards the end of these show dates, Chris became ill and couldn't perform, so Firefall just took over the full show, and were 'discovered and signed' by Atlantic record execs on the spot (more about that coming later). But in this show, earlier in the tour, Chris was definitely in charge, playing a mixture of tunes from his various bands, from the Byrds, Burritos, Manassas, and SHF Bands. This is a fairly short set (probably edited for the radio broadcast), but is of very good quality. Previously, I featured a much longer show (2 sets from Main Point-Bryn Mawr - recently re-uploaded!) from later in this tour. Thanks once again to Rocking-Byrd and his blog (rocking--byrd.blogspot.com) for this one, as well as so many other fine Byrds-related shows. More Firfeall to come.